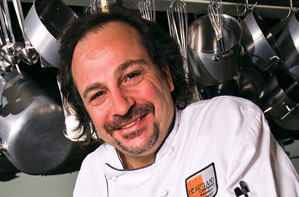 Demystified, ramps are still a tangy bite of spring.
By Ann Bauer
May 11, 2009

Some vegetables are more fashionable than others. Who can say why?

Ramps got rock-star attention when they started appearing on Twin Cities menus several years ago, heralded by servers as tender, fresh, and local. Much of the attraction might have been in their mystery—an unknown name that made them seem exotic. But they are nearly as humble as dandelion greens, and sometimes found in close proximity. What are ramps? Basically, they’re wild leeks.

“I have them all over my backyard,” says Lenny Russo, the chef-owner of Heartland Contemporary Midwestern Restaurant in St. Paul. “They’re really prolific, easy to grow. Ramps are a bulb, part of the onion and garlic family, related to lilies. They love moisture: cool, damp places. Minnesota is a perfect environment.”

Ramps are milder than a ball onion, shaped like a scallion, closest in taste to a leek, but with a stronger, tangier hint of wild chive. They appear as early as late April in northern Iowa, flourish locally during May, and finish in mid-June farther north.

“Local” is Russo’s cardinal rule: He uses mostly ingredients that grow within 250 miles of his Arts-and-Crafts-inspired dining room and wine bar. So Heartland features ramps straight through from mid-spring to mid-summer, sometimes extending the season by pickling and drying the last of the crop.

Since Russo and his wife opened their restaurant nearly seven years ago, it’s had a daily-changing menu. Russo doesn’t decide what to make until roughly 12 hours prior to dinner service, based entirely on what’s in season, what his vendors come offering, and what he happens to have on hand. If you go for ramps, go willing to be surprised (or look for that night’s menu earlier in the day at heartlandrestaurant.com).

What Russo can say in advance is that Minnesota ramps tend to be at their peak around the same time as morel mushrooms and fiddlehead ferns. So you’ll tend to see dishes that feature two or even all of the three. He uses ramps in stews, custards, vinaigrettes, and ragouts. He’ll purÃ©e them with potatoes for a spicy, tangy mash. One menu last spring featured “wild ramp and golden potato gnocchi with a sauce of local sheep milk ricotta and morel mushrooms.” He often serves ramps grilled, alongside meat or fish.

During high crayfish season, starting in early June, Russo even serves the little crustaceans with a relish made of ramps.