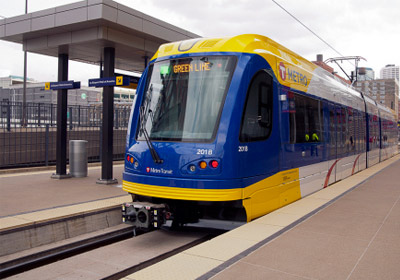 Green Line Ridership On The Fast Track In Second Week

The Fourth of July holiday will undoubtedly reduce the number of commuters traveling by light rail, but the station near the State Capitol will be available to holiday revelers.
July 13, 2014

It was full steam ahead in second week of operation of the Green Line between Minneapolis and St. Paul, with MPR News reporting a 16 percent jump in the number of riders boarding the light rail trains.

The preliminary ridership numbers in week two came in ahead of Metro Transit’s projections. Weekday Green Line travel averaged 32,368 passengers, 4,500 more than the number that rode each weekday in the previous week.

While the number of riders was up for all of the St. Paul stations, the Warehouse and Target Field stations in Minneapolis saw fewer riders in week two; the Minnesota Twins played two home games during the line’s first week, but were on the road last week.

The Fourth of July holiday will undoubtedly reduce the number of commuters traveling by light rail, but the station near the State Capitol will be available to holiday revelers.

Finance and Commerce identified the busiest stations on the new line, based on first-week ridership. The story said that the Nicollet Mall station in downtown Minneapolis, the East Bank station on the University of Minnesota campus, and the Snelling Avenue and Central Avenue stops in downtown St. Paul clocked the highest number of riders. The story added that passengers boarding at those four stations accounted for nearly one-third of all trips during the first week of operations.

The Green Line is a novelty for some riders. On TheOrange, the student blog from Macalester College, a student named Claire was enthusiastic about her experience on the system; she grew up on an Iowa farm and finds the updated urban transit system “so exciting.”

“I plan on taking full advantage of light rail all summer, which will really enhance my enjoyment of these months in the Twin Cities,” she wrote. “I’m confident that my summer will be full of all sorts of adventures—ones completely different from those I had on the farm.“

Here are the boardings by station for the line’s second week: