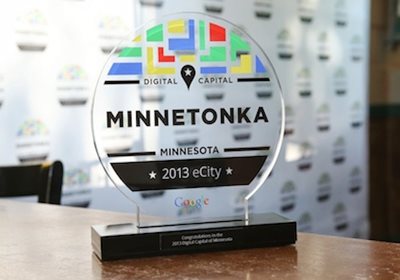 As part of its “eCity Awards,” Google recognized the local city as having the strongest online business community in Minnesota.
September 01, 2013

Minnetonka is one of 50 U.S. cities that achieved Google “eCity” status for utilizing the Internet to identify new customers, connect with clients, and grow the local economy.

According to Google, the city is the best in the state at virtually connecting its schools, retail stores, and restaurants with its residents and visitors.

Google and independent research firm Ipsos MORI calculated the top five cities in each of the 50 states with the highest number of Adwords customers relative to population size. Google’s Adwords allows businesses to use keyworks related to their products and services to develop text-based ads that appear on Google. Businesses in each state’s top five cities were then evaluated on criteria such as whether they are listed in online directories, have a presence on social networking sites, and have websites that allow e-commerce, among other factors. Each criterion was given a score, and each business’ scores were aggregated to provide an overall score. The city with the highest score in each state was awarded “eCity” status. Click here for the full methodology.

Google is recognizing Minnetonka business representatives and city officials at a community event on Thursday at 10:30 a.m. at The General Store of Minnetonka.