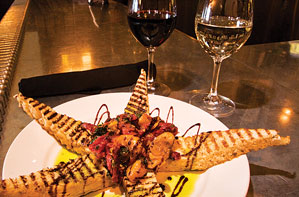 And no pretensions; Spasso is the kind of place where everybody knows your name.
By Ann Bauer
April 11, 2009

Who’s profiting from this recession, you ask? The usual suspects: pawnbrokers, debt collectors, an entire gold-mining town in Nevada. But also Chris Eriksson, a 39-year-old financial advisor with Merrill Lynch who owns the faux-Italian eatery Spasso in Minnetonka, and co-owns a small wine shop next door.

While other restaurants are running specials, adjusting their hours, or closing their doors, Spasso is mobbed every night by about 6 p.m. Cars fill the parking lot of its strip mall location.

Even diehard regulars admit they’re underwhelmed by what the kitchen turns out, which is plentiful and . . . adequate. There are a few standouts: bruschetta; a sausage and bean stew that’s a rich, meaty take on fagioli. This is hardly Tuscan fare, but it’s hearty and tasty and pleasantly, if timidly, spiced.

There’s no question that the real draw at Spasso is the wine: an expansive list, including several rare bottles, that Eriksson serves at retail prices—identical to the ones on the bottles in the adjoining wine shop. Other eat-in establishments mark theirs up 100 to 300 percent.

At Spasso—which means “amusement” in Italian—you can get a bottle of Casa Silva Grand Reserva, an organic Carmenere from Chile that Robert Parker awarded 91 points, for $20. The Dierberg Pinot Noir, a California wine that received 92 points from Wine Spectator, sells for a mere $46.

The list of whites is shorter and leans too heavily toward Chardonnay. But Spasso offers a surprising range of inexpensive sparkling varieties—Prosecco, Cava, Brachetto—and even pours two of them by the glass.

There are weekly wine tastings. Glasses cost $3 apiece during happy hour (3–6 p.m. daily), and there are usually at least two featured flights. The wine list itself is as thoroughly functional as an actuarial table: Wines are organized by region, with their ratings in the margin alongside.

The people I talked to are satisfied. This area has needed a restaurant for a long time, they say—ever since the venerable T. Wright’s (the steakhouse across the street) closed. Spasso has a nice atmosphere—a familiar tile-and-dark-wood, 1980s dÃ©cor. And where else can you get a $3 glass of white Zin or a $100 bottle of Amarone, and know that each is priced at what it would cost you to drink at home?

What’s more, Spasso is cultivating a Cheers-style community where bankers and real estate agents and postmen alike gather nightly at the bar. One man keeps his own Riedel glassware there; bartenders pull it out and wash it the moment he walks in.

And this is the brilliance of Chris Eriksson. He knows what people need when times get tough: cheap wine and a place where everybody knows your name.