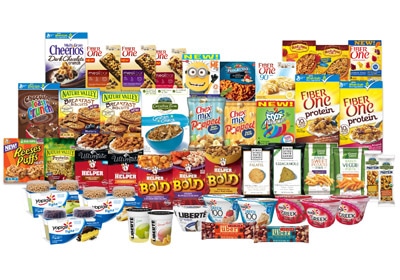 The new products include protein- and fiber-heavy snacks as well as variations on the company’s iconic Cheerios and Cinnamon Toast Crunch cereal brands.
February 09, 2014

General Mills, Inc., on Thursday announced plans to debut 50 new products—mainly representing extensions of existing product lines—and to bring dozens of its other products to new international markets throughout the rest of its fiscal year.

The Golden Valley-based company said the new lineup of products is designed to meet consumers’ increasing appetite for snacks that offer added benefits like protein, fiber, whole grains, or fruits and vegetables.

Some new products have already hit shelves, while others will roll out throughout the winter and spring. Within the snacks category, new products include Nature Valley nut clusters, new Cascadian Farm organic pea protein bars, Green Giant veggie snack chips, and some new flavors and varieties of its Yoplait and Fiber One brands, among others.

The company is also expanding some of its products overseas. It’s bringing a tiramisu flavor of Haagen-Dazs ice cream to Europe, its Yoki brand snacks to Brazil, its Yoplait greek yogurt to France and Belgium, and its Bugles brand “potato sticks” to China.

For a more comprehensive list of new General Mills products, view the company’s press release here. For an image slideshow of some of General Mills’ new products, click here.

“We are focused on the quality of our new product innovation and have a strong slate of new products to bring consumers more of what they want,” Peter Erickson, executive vice president of innovation, technology, and quality at General Mills, said in a statement. “Consumers have unwavering high standards for food. They want products that deliver on quality, taste, health, convenience, and value, but at the same time they want more.”

General Mills recently announced that its second-quarter earnings—which were fueled by new Yoplait, Fiber One, and Nature Valley brand products—climbed 1.5 percent to $550 million, or $0.84 per share, while revenue matched results from the same period a year ago at $4.88 billion.

General Mills is among Minnesota’s 10 largest public companies based on revenue.

Shares of General Mills’ stock were trading up 1 percent at $48.4 per share Thursday afternoon.