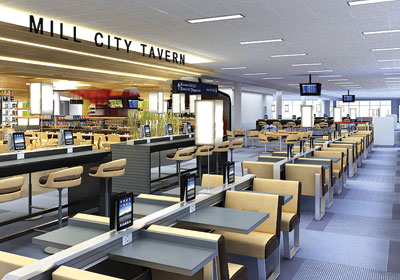 G Is For Good Gate Grub

Delta Air Lines is spearheading a reinvention of airport concessions at MSP, and the results are already apparent.
February 11, 2012

There is little airlines can do in an age of crowded flights, tarmac delays, and austere onboard amenities to improve the flying experience. But they can enhance the experience in the airport, where there is time to kill and space to roam. Delta Air Lines, whose hubs include two of the nation’s most derided airports (New York’s Kennedy and LaGuardia), has taken up the challenge there, and is deploying what it’s learned at Minneapolis-St. Paul International.

On New Year’s Eve, a whole bunch of airport concessions closed their doors at MSP: Wolfgang Puck CafÃ©, a couple McDonald’s, a couple Starbucks, Quiznos, Chili’s, Tequileria, and several other forgettable bars and newsstands. The closings represented the opening salvo in a highly ambitious and inventive reimagining of food, beverage, and media concessions at MSP that will play out over the coming year and a half.

The gambit, for now, is confined to the G concourse, which handled more than 3 million passengers last year, more than any other concourse at MSP. Its concessions are controlled not by the Metropolitan Airports Commission, but by Delta, which is contracting with New York City–based OTG Management to bring a fresh, local, high-tech sensibility to the G. Out are national chains and airport-only brands; in are upscale concepts helmed by Twin Cities chefs and restaurateurs.

“I didn’t want the biggest names,” says Michael Coury, OTG’s concept chef, referencing the superchefs whose concepts exist in dozens of airports. “I want the hungriest guys, the guys that care.” Coury says OTG does not cotton to the numerous shortcuts and compromises inherent in airport food service. “I’m not an airport person; I’m a restaurant person,” he says. “Those are our standards.”

The innovations will go beyond the plate. OTG will remake gate areas to function as dining/seating areas, with pods of iPads for ordering and monitoring flight status. Scattered “media bars” will allow flyers to rent an iPad, customize its content, and take it on the road.

OTG got noticed by Delta after it reinvented food operations at JetBlue’s acclaimed Terminal 5 at Kennedy. MSP is OTG’s second large scale project away from NYC. And OTG’s appeal to Delta is more than esoteric brand value from upgrading the airport experience.

OTG pays 12 percent of the G’s gross revenues to Delta and the MAC. “We are driving 46 percent more revenue per [traveler] at Kennedy T5 than the 50 busiest airports in the country,” explains OTG communications director Sean Aziz. Meaning the potential is there for both the airline and travelers to come out ahead, a rare synchronicity in the travel biz.