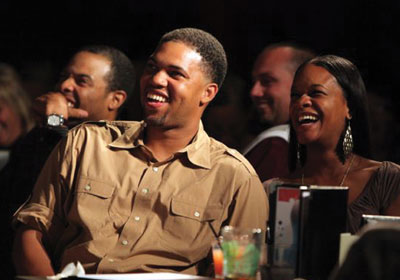 How to enliven your work with humor.
By Melinda Nelson
April 11, 2012

Even without Michael Scott at the helm, The Office, now in its eighth season, continues to illustrate just how amusing the workplace environment can be. Humor also correlates with intelligence and creativity, two vital attributes in most organizations. If you have clients who appreciate a good laugh, here are some ways to impress them with your own intelligence and creativity.

In 1958, former Barnum & Bailey Circus aerialist Dudley Riggs founded his Brave New Workshop in Uptown, which also claims to be the home of the first espresso machine west of the Mississippi River. Five decades later, the workshop, now owned by John Sweeney and Jenni Lilledahl, is the longest-running satirical theater in the country. True to its comedic and political roots, the April calendar features Occupy Arden Hills or, Brother Can You Spare a Dome and The Danger Committee Presents: Love and Other Painful Mistakes with evening shows Wednesday through Saturday, and Late Night Improv on Saturday nights. Sweeney also runs the Brave New Workshop’s creative outreach division, which offers improv-based consulting, sales training, workshops, and emcee services and humorous keynote speeches for corporate meetings and events. Minneapolis, 612-377-2582, braveneworkshop.com

Six years after comedian Rick Bronson convinced the Ghermezian brothers to let him open a club in their West Edmonton Mall, Bronson opened an American outpost in the Ghermezians’ other mall. The slickest of the Twin Cities’ comedy clubs, House of Comedy features Leno- and Letterman-level headliners such as Norm McDonald and Kevin Nealon, as well as up-and-coming talent. The April lineup features Carlos Alazraqui, Mike Vecchione, Steve Byrne, Tammy Pescatelli, and Iliza Shlesinger. House of Comedy also provides entertainment for meetings, events, and other functions. Mall of America, 952-858-8558, houseofcomedy.net

A mainstay of the Twin Cities comedy scene since 1991, Acme bills itself as one of the five top comedy clubs in the country. For a Dunder Mifflin–worthy evening, gather a group for dinner (served family style) and a show. The April schedule includes national headliners John Evans, Bobcat Goldthwait, and Joe Wong, as well as open mic night on Monday evenings. If you’d prefer to bring Acme’s humor into your workplace, the club will work with you to book a workplace-appropriate comedian for corporate meetings, parties, and other events. Minneapolis, 612-338-6393, acmecomedycompany.com

The St. Paul Saints
If you like your comedy laced with baseball and combined with stadium food, why not have Mudonna, the St. Paul Saints’ hot pink porcine mascot, deliver a handful of tickets to your next meeting? On game day, take your place in the Killebrew box seats next to the first- and third-base dugouts, or take over the air-conditioned Sunroom Suite and enjoy an all-American repast of beer, hot dogs, peanuts, and popcorn included in the rental. If your clients have an appetite for the spotlight, make arrangements for them to steal a base, rob a homer, circle the bases in a walk-off grand slam, or throw out the ceremonial last pitch. St. Paul, 651-644-6659, saintsbaseball.com

ComedySportz
If downtown has got you down in the dumps, grab your wittiest clients and colleagues and head to Uptown for a change of scenery. Start at Chino Latino for an infusion of restaurateur Phil Roberts’ signature irreverence. After a round of Cuban Bastards made with Don Q Cristal Rum and Fidel’s Capitalist Pig Roast (10 person minimum), head over to ComedySportz in Calhoun Square for an evening of proudly clean improvisational comedy. If you and your colleagues are so inspired, hire the ComedySportz team to do improv workshops to improve communication, build teams, and create camaraderie. Minneapolis, 612-870-1230, comedy-sportz.com

Breakfast with Al Franken
If your business travel takes you to Washington, D.C., begin your day with breakfast with Senator Al Franken, former Saturday Night Live writer and performer, and longtime political satirist. Once a week, Franken serves up wit and wonkiness, as well as mahnomin porridge made from Mitch Omer’s Hell’s Kitchen recipe, with wild rice from the White Earth Reservation. Breakfast is served from 8:30–9:30 a.m. every Wednesday that the Senate is in session. Online reservations are required. Hart Senate Office Building, Washington, D.C., 651-221-1016, franken.senate.gov