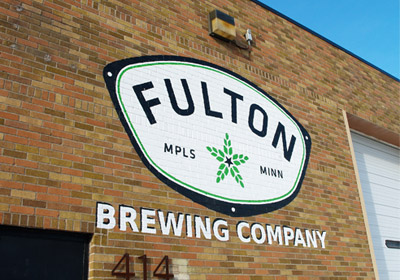 Fulton Beer is adding a 51,000-square-foot production facility in Northeast Minneapolis, which will allow it to boost capacity, expand distribution outside the Twin Cities, and add to its limited and seasonal offerings.
September 15, 2013

As new breweries continue to pop up around the Twin Cities, one fast-growing Minneapolis beer maker is expanding through the addition of a second local brewery facility.

Fulton Beer said that late next year it will begin brewing at a new 51,000-square-foot production facility in Northeast Minneapolis, in an existing building near the corner of University and Lowry avenues.

Fulton said that its new brewery will feature an “80-barrel brewhouse” and “high-speed bottling and kegging lines”—which will help boost annual brewing capacity to 20,000 barrels, “with the ability to expand substantially in the future.”

Fulton has quickly outgrown its brewery in Minneapolis' North Loop neighborhood, where it has recently added new fermenters and other equipment but has run out of space. Next year, the brewery hopes to increase production by roughly 40 percent to 15,000 barrels, according to co-founder Ryan Petz. By 2015, Fulton aims to reach its new 20,000-barrel capacity and will consider adding new equipment from there.

The increased capacity will also allow Fulton to expand distribution beyond the Twin Cities, Petz said. The company has been approached by distributors from throughout the region, but Fulton remains “focused on Minnesota” and will “take it slow” as it expands outward from its Twin Cities home base, he added.

The new brewery will also allow Fulton to add to its limited and seasonal offerings and put its Ringer beer, an American Pale Ale currently available only on draft, into bottles.

Once the new brewery is up and running, all of the beer that Fulton distributes will be made there, while its existing North Loop facility will continue to produce beer that is sold at its on-site “taproom.” Currently, Fulton produces most of its beer at the North Loop brewery but contracts out some of the production to Stevens Point Brewery in Wisconsin, Petz said.

Fulton said it will continue to operate its North Loop taproom—but it will not add a second taproom in Northeast Minneapolis, as state law limits breweries to one taproom per company.

“We’ll have many more details to share on our new project over the coming months,” Fulton wrote in a blog post. “In the interim, it’ll be business as usual at our downtown brewery and taproom.”

While Fulton’s new Northeast brewery won’t have a taproom, the public can expect to eventually take a peek inside: “We hope to get into a weekly tour schedule at some point,” Petz said.

Plus, it will be located a stone’s throw from a number of other taprooms that have recently opened in Northeast Minneapolis, including 612 Brew, Dangerous Man Brewing Company, and Indeed Brewing Company.