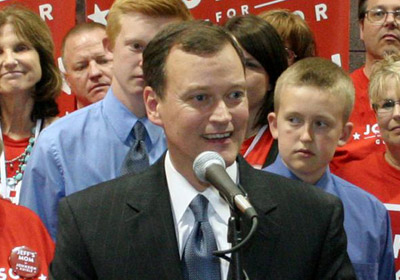 Though many of Johnson's positions are unsurprising for a GOP nominee for governor, he breaks from the standard Republican line on a handful of issues, according to analysis from MinnPost's public affairs reporter.
September 27, 2014

If Republican Jeff Johnson were governor, more sick people would be able to obtain medical marijuana, but fewer people could be able to enroll for health care coverage through MNsure, the state’s exchange. The state’s tax code would likely get a major overhaul, but taxes wouldn’t go up.

Those are Johnson’s positions on the major issues he may face as governor if he beats incumbent Democrat Mark Dayton this fall. Johnson’s biggest challenge now, besides building name recognition, is creating a contrast between how he would govern and the policies crafted under Dayton over the last four years.

Many of his positions are unsurprising for a GOP nominee for governor (generally: lower taxes and less government), but Johnson also breaks from the standard Republican Party line on a handful of issues.

Here, a look at where he stands on everything from education funding to the state’s new medical marijuana law:

Education: Johnson made education an early focus of his campaign, but Democrats have tried to use the issue against him, launching attack ads claiming Johnson voted to cut early childhood education funding as a state House member in the early 2000s.

For his part, Johnson has focused on closing the state’s achievement gap, which is one of the worst in the nation. He says that can be achieved through more local control — allowing schools to hire and fire teachers based on merit, not tenure. He’d also expand the presence of Teach For America in the state, which puts young teachers in troubled inner city schools.

But he doesn’t propose fixing the gap by increasing funding — for the most part. “I don’t think it’s all about money. That has been our answer over the last 30 years, to increase funding, and that’s not solving the problem. I fully recognized that certain districts, particularly in the inner city, have needs that other areas of the state don’t have. We have to recognize that, and I do,” Johnson said.

But he noted that Minneapolis school districts receive far more funding that the average state school district, but the gaps persist. “What we ought to be doing is looking to other states around us who have been successful in narrowing the achievement gap and try some of the things they are doing,” he added. “If some of them cost money, I’m OK with that, if we can show they are actually improving results.”

Tax reform: It’s not yet clear what the next budget facing lawmakers will look like. For now, economists are predicting a sizable surplus for the 2016-2017 budgeting year, but the revenues have come in under projections for the last several months.
Johnson admits he won’t spend much time planning his budget until he sees the numbers, but he does think Dayton missed an opportunity in the area of tax reform during his first term. “He had this dream scenario that any governor would want: to truly really rewrite the tax code to make it competitive, and that’s what he told us he was going to do,” Johnson said.

Johnson said he’s open to pursuing sales tax reform, an issue that got Dayton in trouble in 2013 when he proposed to lower the overall sales tax rate and broaden it to new items. At the time, Republicans went after the first-term DFLer for proposing to add the sales tax to everything from wedding dresses (clothing purchases of $100 or more) to car repairs and haircuts.

“I would be open to looking at almost anything, but the direction I would move would be that philosophy of low, broad and simple, with low being the most important of the three,” he said. “You are not going to see a tax increase, but there’s a lot of reform that we can make and still actually lower taxes for people.”

MNsure: Johnson is also more hard-nosed than most Republicans on the state’s health exchange, MNsure, though he also acknowledged that his powers to change the already-running program are limited. He would apply for a waiver from the exchange from the federal government, but if that doesn’t happen, Johnson says he’d try to improve MNsure. “I’m realistic enough to realize that MNsure is here for awhile, and Obamacare, well, I can’t do much about that,” he said.

As long as the exchange is around, Johnson said he would change the makeup of the MNsure board, which governs the exchange. Johnson would add people who have “experience in the healthcare industry” — for example, representatives from insurance agencies. He would also tighten rules around what the board is authorized to do or change in regards to the exchange.

“They are able to make rules with respect to MNsure in ways that no other agency has been allowed to do,” Johnson said. “They don’t have to go through the normal process of public input and public hearings.”

Gay marriage: Legal same-sex marriage is the law of the land now in Minnesota, and Johnson has no intention of changing that as governor. “I think religious freedom should always be a concern for people, and if we are seeing examples where peoples religious freedoms are being infringed, we absolutely need to address it, but this is not going to be a priority for me,” he said. “Minnesotans have made a decision, and I believe most Minnesotans, including those who support traditional marriage, are ready to move on to other topics.”

Minnesota Sex Offender Program: Minnesota’s sex offender treatment program in Moose Lake and St. Peter has always been controversial, but the issue may soon come to a head.

A class action lawsuit on behalf of all the nearly 700 clients in MSOP, currently pending in federal court, argues the program is administered unconstitutionally because it offers treatment with no promise of ever getting out of the prison-like facility (no one has ever been unconditionally released from the program in its nearly 20-year history). U.S. District Court Judge Donovan Frank has said the program raises serious constitutional questions, and he could act on his own if lawmakers don’t try to fix the problem. But releasing sex offenders has always turned political in the hands of legislators and gubernatorial administrations.

Johnson said Dayton punted on the issue during his first term as governor, asking the Legislature to find a solution. “Dayton hasn’t shown leadership because it’s just a really tough political issue, and he’s just unwilling to take that risk,” Johnson said. “What I’ve said consistently on this is I’m not going to use the issue as a political football. I think both sides have done that to a certain extent.”

But while Johnson said he would listen to both parties on the issue before acting, he wouldn’t cite any specific solutions he favors.  Some have proposed creating a less-restrictive living facility for offenders off of the MSOP campus in Moose Lake, while others would rather change the system to cut back on the number of offenders being committed to the program in the first place. “I’m open to practically anything as a starting point on this, but I think what we’ve got to do is hammer something out that everyone can live with,” Johnson said. “I’m not going to try and dictate the outcome. Then…the DFL will attack me for it and say we can’t go there and we end up in the same spot we are right now.”

Transportation/infrastructure: Johnson agrees that Minnesota’s next governor will have to deal with the state’s growing transportation and infrastructure needs across the state — some groups put the price tag as high as $6 billion — but he’s not willing to support a gas tax increase to pay for the improvements.

“To argue that we don’t have the money to do the very fundamental job of government, like keeping our roads and bridges safe and adequate, is a bit out of touch for politicians,” Johnson said.

Johnson agrees that roads and bridges should be a priority —  “that’s one of the few, if not possibly the only area, where I think we aren’t spending enough money,” he said. Johnson said he would take the focus off of things like light rail transit and street cars and put roads and bridges back at the top of the list, but he’s not willing to support a gas tax to pay for improvements.

To pump more money into projects, Johnson said he’d explore finding a constitutional way to increase the amount of bonding money dedicated just to roads and bridges. “If there’s any project that is regional or statewide in significance for the long term — which is what a bonding bill is for — it’s roads and bridges,” Johnson said. “This might require a constitutional change to do in any significant way, but that’s something I am willing to do” (Johnson thinks there may be some constitutional barriers to using general obligations bonds for road projects).

Cutting government spending: To pump more money into roads and bridges, Johnson also proposes making cuts to the state’s budget elsewhere, particularly in the health and human services. It’s the second largest area of the state’s budget and is “completely out of whack” compared to other similar state’s spending, he said.

“There are a lot of programs where we are funding them because we always have rather than measuring them to see if they are doing what we want them to,” Johnson said.

Off the bat, Johnson would look at cutting the State Health Improvement Program (SHIP), which sends tens of millions of dollars a year to local governments to “tell people how to eat healthier and how to exercise more,” Johnson said. “I’m not sure if that should be a top priority when we claim we don't have enough money to repair potholes.”

He’d also like to take a look at the state’s job training programs. While the programs are important, he said he sees a lot of overlap at the county level. “There are so many programs and you can’t keep track of them and one doesn’t know what the other is doing,” he said. “We are not being at all efficient.”

Medical marijuana: Much like Dayton, Johnson doesn’t support full recreational legalization of marijuana, but he said he would support expanding the state’s current medical law to allow more people with serious illness to use the drug.

“I would support an expansion to help more people as long as I was absolutely confident it wasn’t a back doorway for recreational legalization for some people. We have seen that in some other states, like California, where their medical marijuana law is really a joke,” Johnson said. He said he would support expanded, but still strict medical marijuana laws that only allows it to be disbursed from a doctor a patient already has a relationship with.