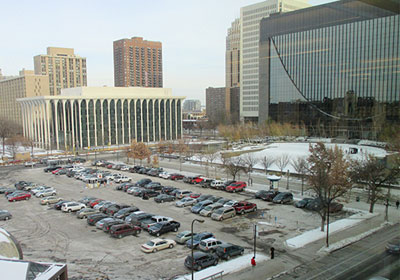 The 1.7 acre site is finally attracting interest as nearby areas boom.
December 22, 2014

Four local developers submitted proposals for a City of Minneapolis-owned parcel of land with plans for an “iconic, high-quality design.”

Doran Development LLC, Duval Development, Mortenson and United Properties Investment LLC each expressed interest in building on the “Nicollet Hotel Block,” which is bound by Washington Avenue to the north, Nicollet Mall to the east, Third Street South to the south and Hennepin Avenue to the west.

The city’s request for proposal said all developments should have at least 20 active floors with a mix of commercial, retail, residential, office and hospitality uses. Street front retail, integrated public/green space and room for potential streetcar tracks were also part of the equation.

“The Nicollet Hotel Block is arguably the sexiest parcel in the city, and consequently, we will not settle for anything short of iconic,” Third Ward Councilman Jacob Frey said in a statement around the time the RFP was released.

Finance & Commerce was able to get information and renders of the proposals. Duval's project would reach 900 feet (render), surpassing current city tallest, IDS, which is 792 feet. The project would included 220 apartments, 250 hotel rooms and office space. Doran is proposing a 30-story residential tower and six-story hotel (render). United Properties wants to build a 36-story tower with 300 apartments and a full-service Hilton hotel (render).

The parcel was once the site of the Nicollet Hotel, which was demolished in 1991. The city has owned the parcel since 1993, and it has largely been a parking lot and bus layover facility since.

The city has struggled to find development on the land—despite its prime location near the booming North Loop neighborhood—in part because the city acquired the land with grant funds from the Federal Transit Administration. This required any development to incorporate a transit facility, which proved difficult. Nobody expressed interest in the site when the city put out an RFP in 2005. But a 2013 deal with the FTA resulted in the transit facility moving to the Gateway Ramp, freeing the Nicollet Hotel Block from those requirements.

The proposals for the block are closing as plans continue to move forward for a redo of Nicollet Mall. The City of Minneapolis and the Downtown Council selected James Corner Field Operations—the same group that created New York City’s High Line project—for the redesign. Plans for an eventual streetcar that would run from Nicollet and Lake streets up to Northeast Minneapolis along the mall are also underway.

City staff will conduct an internal review of the proposals through January, with community outreach following that. The City Council is expected to pick a developer by April with construction anticipated for early- to mid-2016.