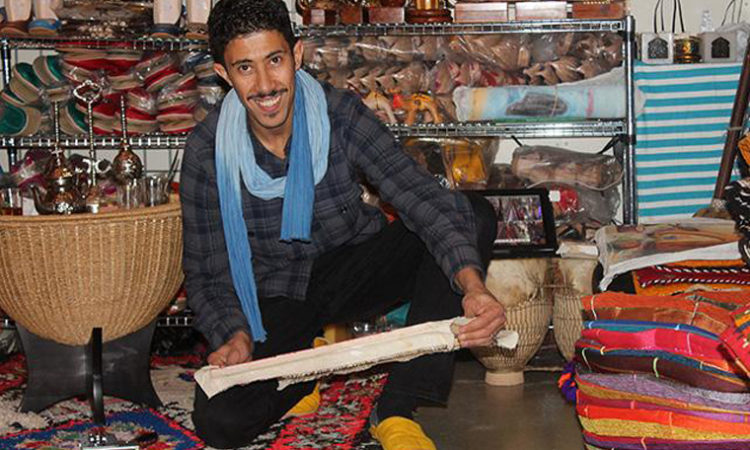 Mostafa Khchich, an immigrant from Morocco who worked at Macalester College as a cook and server, left his job after three years to open a shop in Minneapolis. ( Photo by Ibrahim Hirsi/MinnPost)

For People of Color Starting a Business, Access to Capital Remains a Big Challenge

According to a U.S. Census Bureau survey, the number of minority-owned companies in the U.S. grew by nearly 5 percent in 2014.
By Ibrahim Hirsi
November 03, 2017

The paychecks Mostafa Khchich earned working at Macalester College as a cook and server hardly paid his bills in the U.S., let alone support his family in Morocco.

So last year, after working in the cafeteria for three years, Khchich quit the job and opened a small business inside Minneapolis’ Midtown Global Market, selling handcrafted goods made in the north African country.

“There was no advancement there at all,” he said of his old job. “Plus, sometimes you do the work of two or three people. It was really very hard working in the kitchen, cooking for thousands of students.”

Khchich is among a new wave of people of color in Minnesota — and across the country — who are opening their own businesses, according to multiple reports released in recent years.

There are many reasons people leave their day jobs and become entrepreneurs. For some, entrepreneurship a way to fulfill an old dream; for others, it’s an effective way to build savings and assets.

Once they become entrepreneurs, however, most them face one common challenge: access to capital — a barrier that dozens of nonprofit organizations and government agencies in the Twin Cities metro area are trying to address.

Entrepreneurship among minority groups nationwide has dramatically increased in recent years. For example, according to a U.S. Census Bureau survey, the number of minority-owned companies in the U.S. grew by nearly 5 percent (949,318 to 996,248) in 2014.

So why have so many people in the state’s minority community — and especially people of color — become entrepreneurs? The reasons they get into business aren’t much different from those of whites, said Gary Cunningham, who heads the Metropolitan Economic Development Association (MEDA), which provides support to entrepreneurs of color.

Some of them want to be “their own bosses,” said Cunningham, citing a recent report by the Association for Enterprise Opportunity. Others want to make more money. Or they’re dissatisfied working in corporate America. Or they’re inspired by their family and friends.

There are also other reasons that force some professionals of color to leave the workforce: some of them — like Khchich — feel stuck in their jobs because their wage growth had long remained stagnant; others feel discriminated against.

“When we do mergers and acquisitions, most of the people we meet … are folks who have been in the corporate world, but they want to get out of that,” Cunningham said. “They see owning their business is a way that they can build their own wealth.”

When entrepreneurs from communities of color successfully open their own businesses, many of them face challenges accessing capital. One reason receiving loans is such a problem, said Cunningham, is because of discrimination in the capital markets.

Indeed, a report by the Minority Business Development Agency, echoed that sentiment in a 2017 report saying that financial institutions are more likely to deny minority-owned companies loans.

That’s why dozens of nonprofit organizations and government agencies across the Twin Cities metro area are trying to address those issues — by financing minority-owned businesses through alternative sources. 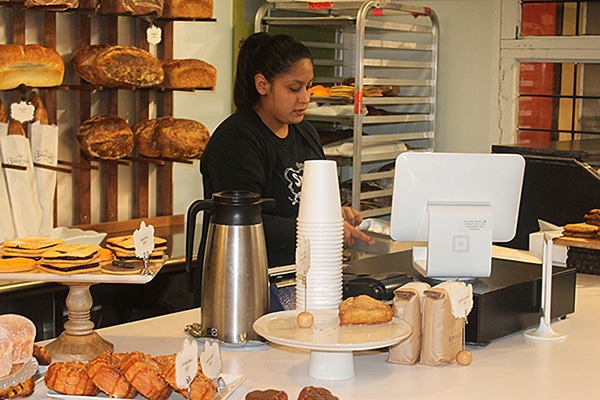 Mayra Figueroa works at a minority-owned business in the Midtown Global Market in Minneapolis. (Photo by Ibrahim Hirsi)

MEDA, for example, supports minority-owned businesses by providing them with access to capital, consulting services and contract opportunities in private and government markets.

Connect2Capital is also another nonprofit organization that provides minority-owned businesses — including those who may not qualify for loans through the traditional banking system — financing of up to $4 million.

Like MEDA and Connect2Capital, the Latino Economic Development Center provides minority-owned companies, especially those owned by Latinos, with financial assistance as well as business training and consulting services.

“We give orientation on what it means to have your own business,” said LCDC’s Marco Cruz Blanco. “We also offer business classes to help them prepare a business plan and give more concrete form to follow through whatever business ideas they might have.”