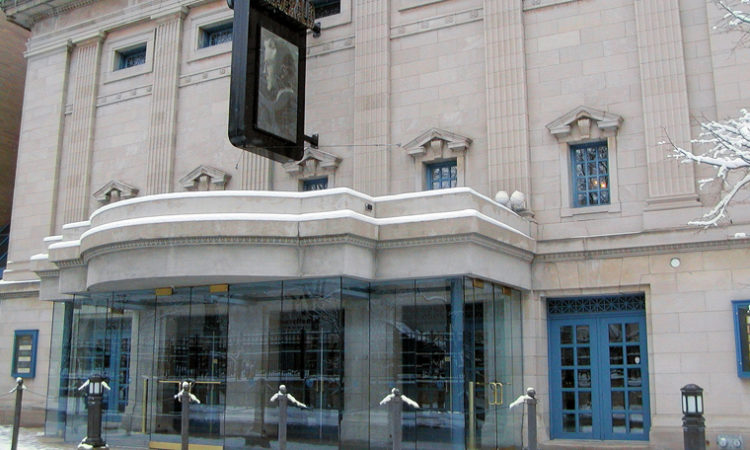 The front entrance into the Fitzgerald Theatre. ( Photo by William Wesen/CC)

MPR will continue to hold events at the 1,000-seat Fitzgerald Theatre despite the sale.
By Amanda Ostuni
October 24, 2018

St. Paul’s oldest theater, The Fitzgerald Theatre, is getting a new owner—not to mention a familiar one.

Minnesota Public Radio announced Tuesday afternoon it had reach a deal to sell the venue to First Avenue.

MPR’s decision to sell was based on a Historic Structures Report it commissioned several years ago that examined the needs of the facility and how it fits with MPR’s mission.

“As we carefully considered our stewardship of this historic facility, the changing needs of our community, and our vision for serving more people, we decided it was best to look for a new potential owner and caretaker of this beloved theater,” wrote Jon McTaggart, president and CEO of Minnesota Public Radio, in an email to MPR members.

MPR has owned the theater, commonly called “the Fitz,” since 1980 when it was then known as The World Theater. Though MPR says it will continue to hold events at the venue, relieving itself of ownership duties will allow the nonprofit to conduct events elsewhere in Minnesota, extending MPR’s geographical reach.

McTaggart said First Avenue was a good partner for the sale because of the vision each organization shares around serving the community. First Avenue, which has largely operated in Minneapolis through the venues it owns and promotes, has made efforts of late to go beyond its home base into Minnesota’s capital.

“Saint Paul is becoming a destination for many musicians, just as Minneapolis has been,” said First Avenue owner Dayna Frank in a statement. “We’re committed to helping to grow Saint Paul’s music scene as well.”

Over the last-half decade, First Avenue has added two St. Paul venues to its empire: the 2,400-person capacity Palace Theatre and the 350-capacity Turf Club.

At the start of October, First Avenue officially added Fine Line Music CafÃ© to its enterprise. The deal for Fine Line, located in Minneapolis’ warehouse district, was announced just over a month ago and First Avenue assumed ownership October 1.

First Avenue also owns and operates its flagship venue in downtown Minneapolis, the 1,550-person capacity Mainroom, and the neighboring 7th Street Entry which fits up to 250 guests.

“Our goal is to bring together people with diverse interests and backgrounds, and part of that is expanding the First Avenue family to include other venues throughout the Twin Cities,” said Frank. “We’re excited about the opportunities for more events and performances in another iconic space in this community.”

The deal between MPR and First Avenue still has to be finalized, and details have not yet been disclosed. Both sides expressed excited about the deal with McTaggert suggesting it would be a win-win for everyone involved.

Said McTaggert: “We’re pleased the theater will be in good hands with First Avenue.”