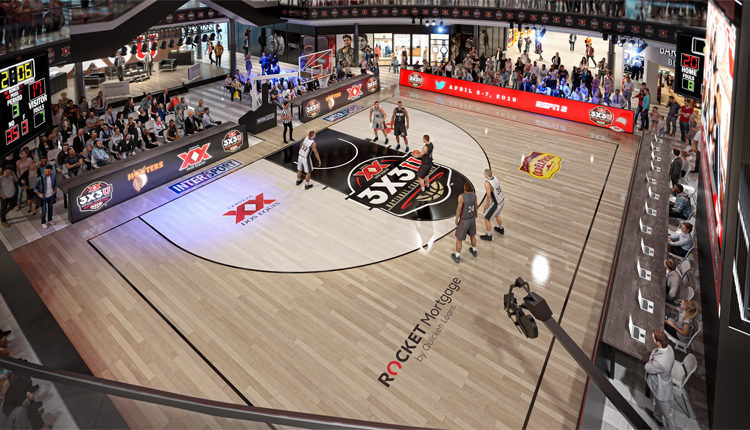 General Mills and Mall of America are among the local businesses getting in on the action of the NCAA Men’s Basketball Championships that’s expected to bring 94,000 visitors to Minnesota.
By Amanda Ostuni
March 27, 2019

As March Madness caps off with the Final Four NCAA Men’s Basketball Championships in the Twin Cities in less than two weeks, madness will abound off the court throughout the area. With approximately 94,000 visitors expected to travel in for the event—bringing with them an estimated $142 million economic impact—local businesses are hoping to cash in.

One entity bringing its A game: Mall of America.

The mall has courted a pop-up merchandise shop, the 2019 Basketball Championship Superstore, which will sell basketballs, memorabilia like glassware and keychains, headwear, sweatshirts, t-shirts and more.

“This is a once-in-a-lifetime experience for the Twin Cities.” says Jill Renslow, senior vice president of marketing and business development at Mall of America. “And we’re looking forward to delivering an amazing experience for thousands of basketball fans from across the nation.”

Elsewhere in the Mall of America, events are being held, such as the second annual Dos Equis 3X3U National Championship from a basketball court created in the mall’s rotund and atrium space. Organized by Chicago-based entertainment marketing firm Intersport in partnership this year with Hooters, Rocket Mortgage, and Old El Paso, the tournament will be a three-day competition featuring All-Star players from every Division 1 conference.

Teams will compete for a $150,000 prize pool and a 2019 USA Basketball 3×3 Open National Championship playoff berth. Free to spectators, the Dos Equis tournament be held April 5 through 7. More information on the tournament can be found here.

This month, however, will be the Mall of America’s “Let’s Celebrate Basketball” concept. Over a four-day stretch, from March 28 through 31, a series of events and activities will be put on, including mascot appearances, pep band performances, electronic basketball, a balloon wall for photo ops, and open court play in the rotunda.

The mall’s full agenda of Final Four-themed programming is listed on its events page.

Yet, pop-ups timed around the Final Four aren’t being contained to Bloomington. Premiering April 1 on the first floor and skyway level of Gaviidae Common in downtown Minneapolis, a month-long pop-up multi-business market called Chameleon Shoppes will open.

Chameleon Shoppes will feature approximately 50 small businesses, most of which are women- and/or minority-led. The businesses—varying in focus from food, to soaps, to woodworking, to pet accessories, and more—will occupy spaces ranging from about 1,500 square feet to 5,700 square feet. Chameleon Shoppes will run 10 a.m. to 2 p.m. on Wednesdays, Thursdays and Fridays through April 26 with special hours available throughout Final Four weekend.

The Downtown Council sees the Final Four weekend as a great time to debut Chameleon and maximize the opportunity it presents for its participating businesses.

“We have exceptional small businesses and entrepreneurs in our city that represent our incredible diversity,” says Dan Collison, the Minneapolis Downtown Council’s director of downtown partnerships and head of the Chameleon program. “Chameleon Shoppes… will offer them a chance to showcase their products and offerings in a way that will provide new audiences while adding to the vibrancy of our downtown community.”

Also getting in on the action is General Mills. The Golden Valley-based packaged foods giant is teaming up with Cargo, a rideshare in-car commerce platform based in New York, as well as the Coca-Cola Company and official Cargo partner Uber to enhance the rideshare experience.

From March 20 through the championship, Uber customers in the Twin Cities will be treated, in select cars, to free coke products and limited-edition snack boxes featuring General Mills products including Bugles, Nature Valley products, and Core Power high protein shakes.

These partnerships and pop-ups are in addition to official NCAA national brand-sponsored events which include Fan Fest (a weekend of interactive games, celebrity athlete appearances, autograph signings, and more), Reese’s Final Four all-star game and autograph session on Friday at U.S. Bank Stadium, and live music at the Armory and on Nicollet Mall. A full calendar can be found here.

To make way for the events and influx of tourists, Minneapolis began rolling out street closures on March 25. Until April 12, Chicago Avenue between Fourth and Sixth Streets, and Norm McGrew Place between Third and Fourth Streets will be closed. Additional closures and lane restrictions will go into effect April 3.

Steve Cramer, president and CEO of the Minneapolis Downtown Council, says the road closures are among the many signs the city is gearing up for what the council expects to be great weekend for downtown businesses.

“[Final Four weekend is] going to fill our hotels, it’s gonna bring a lot of people to restaurants and other hospitality-related establishments [downtown] and it’ll for sure be a boost in attention that’s paid to Minneapolis and the Twin Cities area,” says Cramer. “People are very much looking forward to it.”