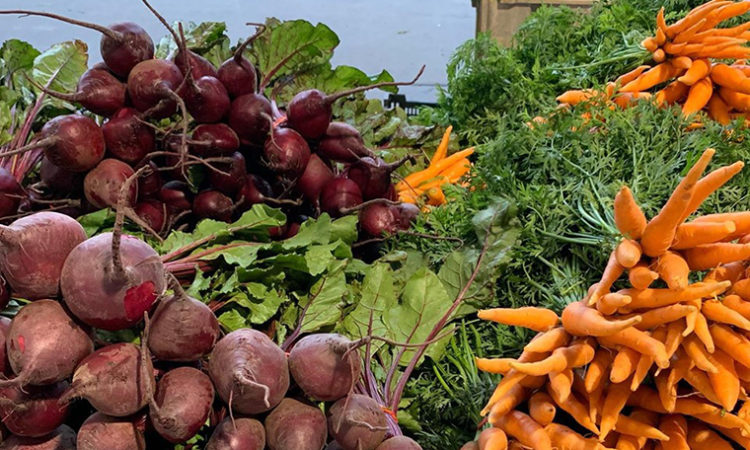 A wet, cool spring has delayed planting season for many Minnesota farmers.
By Christopher Lemke
July 11, 2019

Pam Benike has run a produce and livestock farm in Elgin since 1980 and vendors at farmers markets in Minneapolis and Rochester. Like many farmers in the state, she planted crops significantly later than expected this year due to unfavorable weather conditions.

“It makes it tough if people are expecting to come to the farmers market and get a certain product and you don’t have it on the table. Then they go looking for it elsewhere,” Benike says, adding that her regular customers will always come back. But for new and occasional customers, she’s not confident they will. About 60 percent of her customers are regulars, while 40 percent are non-regulars.

A rainy, cool start to Minnesota’s growing season has delayed farmers from planting their spring crops. That’s eroded time from the total growing season, and the crops that were harvested in spring have been slow to get out to the farmers market.

David Kotsonas, the director of operations for St. Paul Farmers’ Market locations, has felt impacts of the delays, too.

“I’ve seen years where we’ve had produce available as early as April, and this year it was really kind of almost June before we really started to have much of anything,” he says.

Kotsonas says that produce has been delayed about three weeks. That’s time for growing and selling that can be difficult to make up. In a good year, the produce would be two weeks ahead of schedule, he says.

There were only about 15 days in April and May that were suitable for field work in Minnesota, according to the U.S. Department of Agriculture. That number for April and May is down from about 21 days in 2018 and 26.5 days in 2017.

But Benike says 2017 and 2018 also had adverse weather conditions that made growing difficult.

This year’s cold and rain have hindered the development of crops. Too much rain and wind can damage seeds, leaves, and fruit. Trying to harvest when the field is too wet can damage the soil, Benike adds.

Annie Klodd, a University of Minnesota Extension assistant professor of fruit and vegetable production, says that how planting delays affect crop yields depends on management practices, how long the delay is, and the produce crop being grown.

A farmer can switch to a variety of seed that will mature in fewer days than the variety originally chosen, Klodd says. But changing varieties will affect other variables, such as flavor, disease resistance, size and shape, color, texture, and yields. Some desirable produce varieties take longer to mature, but that’s not always the case.

“There are a lot of really great varieties that will mature quickly and all of these variables are different for every single variety of every vegetable,” Klodd says.

Kathy Zeman, executive director of the Minnesota Farmers’ Market Association, says farmers can switch to a different type of crop that needs less time to grow, but they’ll need to make sure there’s a market for it.

Aside from the weather, farmers markets face a few other emerging challenges. For instance, more and more grocery stores are getting into the local and organic food game. Some consumers might find it more convenient to pick up produce at places like Fresh Thyme or Hy-Vee, which are open for longer hours and more days.

The challenge, Kotsonas says, is for farmers markets to be appealing for other reasons besides convenience.

He notes that produce at the market has been picked within the past 24 hours at peak ripeness, which increases its flavor and nutritional value. Also, he sees value in people interacting with the farmers growing their food and buying directly from them.

“It’s really intimate. These people are growing stuff that we’re putting into our bodies,” he says. “When you’re getting produce at the store, if it’s not organic, you don’t know what chemicals have been used on it. But you’re going to eat it, too.”

And there are other attractions besides food, Kotsonas says. Musicians perform Americana, oldies, and yacht rock at some farmers market locations. He’s also bought a new grill for chef demonstrations. And he’s planning to have a chef pairing each month at the Downtown St. Paul market, where two area chefs who haven’t previously worked together create a small menu featuring items from the market.

Other attractions at farmers markets have been on the rise in recent years, Zeman says, such as vendors selling homemade foods like jams and baked goods. Some vendors also offer food samples, and food trucks have begun making visits.

Farmers markets are also a place for building a community, says Kotsonas. “These are largely like-minded folk all gathering together to have a shared experience.”

The goal, Kotsonas says, is to provide “the whole package for people so that they have a good time, it’s easy as it can be for them, and that they leave feeling good about how they’ve chosen to spend their money.”

A Dose of Optimism

“That’s huge,” Zeman says. “You can tell that we’ve reached a level of sustainability that that many markets can offer SNAP and the additional Market Bucks that go along with that. We’re the strongest we’ve ever been, the most sustainable, the most viable.”

Within the past seven years, the number of farmers markets in the metro area went up before going back down again, which Zeman says was a normal contraction. She says there were too few farmers at those markets compared to the other types of vendors. “You cannot have a farmers market on every corner. We don’t have enough customers and we don’t have enough produce farmers or vendors to get there,” she says.

As for the weather, Zeman says Minnesota farmers have seen similar cold, wet season starts before. She says more harvested produce should be coming from the fields rather than greenhouses by the middle of June, but she’s seen the opposite this year. So, she expects more farmers will use greenhouses in the future.

Benike initially constructed greenhouses to grow plants during the winter. “We’ve actually used them more for summer growing than we ever planned to” in order to control temperature and moisture on plants, she says. Without the greenhouses, Benike would have had bare tables at the farmers market in June, she says.

“We’re going to deal with weird and abrupt weather patterns for now and forever” because of climate change, Zeman says. “It will take some creative and tenacious farmers to figure this out.”