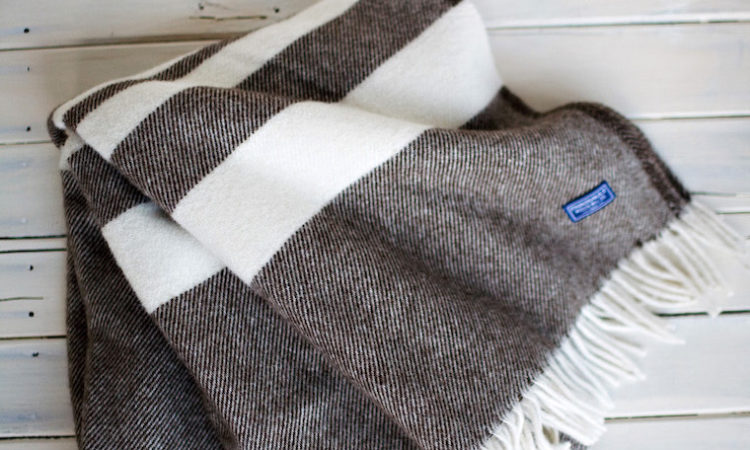 The former CEO of Allen Edmonds partnered with the Mooty family to form a new ownership group for the heritage brand—with big plans for growth.
By Allison Kaplan
February 06, 2020

The former CEO of American-made men’s footwear brand Allen Edmonds is taking charge at one of Minnesota’s most iconic heritage brands, Faribault Woolen Mill Co., with plans to expand into new product categories and step up distribution.

Paul Grangaard spent a decade leading Wisconsin-based Allen Edmonds before leaving in 2017 to form CircleRock, an American-made menswear brand with a store in Linden Hills called House of Style. On Thursday, CircleRock announced its partnership with the Mooty family, which re-opened the mill in 2011 after a two-year closure. It is one of the last woolen mills operating in the U.S. Under the partnership agreement, Grangaard will serve as chairman and CEO of Faribault Woolen Mill Co., and Paul Mooty, who was leading the ownership group he established with his cousin Chuck Mooty, will serve as vice chairman of its board of directors. CircleRock co-founder Ross Widmoyer—a former executive at Allen Edmonds and Target—is Faribault’s new president and chief operating officer.

“The experience and expertise that the CircleRock team brings are exactly what we need to build this business,” Paul Mooty said in a statement. “I’m especially excited about what this consolidation means for the men and women who have rebuilt Faribault Woolen Mill over the last nine years. This combination is now about accelerating and investing further in our success.”

Founded in 1865, Faribault Woolen Mill is one of the last vertical woolen mills in the country. It is part of the very fabric of the southern Minnesota town on the Cannon River that it is named for; today, some of the company's 60 employees today are fifth generation craftspeople. Known for manufacturing blankets used by American soldiers in World War I and II, Faribault now makes pillows, scarves and other accessories along with its signature blankets. But Grangaard says the current assortment is too narrow.

“They haven't been focused enough on product. It's too dark and too blue. We need brighter colors. There's nothing for holidays, for the change of seasons,” Grangaard says. “We're going to obsess about the details.”

A flurry of national press surrounded the reopening of the mill in 2011—at the height of the made in the U.S.A. heritage movement—but the hype may have outpaced results. In recent years, Faribault has tried partnering with department stores, specialty stores, and selling direct to consumer. Former CEO Tom Kileen spoke to TCB last year about the challenge of growing beyond a regional heritage brand. “The initial attraction, that emotional connection—the story, the craftsmanship—gets people to buy,” Kileen said, “but it’s not necessarily obvious why they’d buy again.”

Grangaard believes heritage is a good starting point. “People really respect longevity, quality, helping local companies build employment. Heritage is about history, stories. But the product has to look fresh and new for the 21st Century.” Grangaard says. He plans to build on Faribault's sustainability. “Our company is perfectly situated for that: wool is sustainable. Sustainability is a big part of the idea of heritage.”

Grangaard says he sees opportunity to increase direct-to-consumer sales through e-commerce and stores. “In today's world, you have to control your own destiny,” Grangaard says. Currently, there’s a retail shop at the mill in Faribault and one in downtown Minneapolis. The CircleRock store in Linden Hills will convert to a Faribault store. Grangaard says the company does not have the capital to expand quickly, but in the near future, he hopes to open a store in Chicago. He also plans to extend the brand into new menswear categories and add women’s scarves, wraps, and ponchos. The focus, he says, is on “urban adventurers.”

“We're going to have a classic first 100 days with an energetic thrust of activity,” Grangaard says. “We'll really focus on product for fall. Expect to see lots of new product from us in August.”

Financial terms of the partnership were not disclosed. In addition to Grangaard, Mooty and Widmoyer, the new company’s board of directors will include Allen Dittrich, senior vice president and chief operating officer of Duluth Trading Co. and Fred Haberman, co-founder and CEO of Minneapolis-based advertising and marketing agency Haberman.