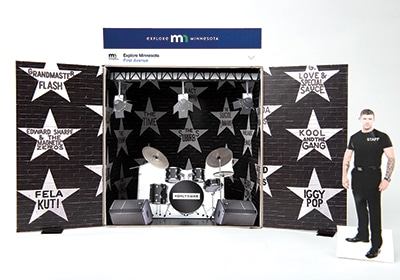 Explore Minnesota Is Marketing Inside The Box

The tourism agency is looking for visitors in atypical places.
May 09, 2016

Tourism is a big industry in Minnesota, bringing in millions of visitors, who spent $13.6 billion in 2014 and helped employ over 250,000 people. Despite that, the North Star State doesn’t quite have the cachet of some warmer locales, so Explore Minnesota—a state-funded tourism group—is tasked with improving Minnesota’s brand internationally to bring in more dollars.

It’s done that with traditional advertising for some time, but in recent years, the group has found success with social media, including the organization’s #OnlyInMN campaign to share photos and experiences with friends. The hashtag has already been used over 300,000 times.

This summer, it’s taking a new angle: Explore Minnesota plans to hit target markets, including Kansas City, Denver and Chicago, with “out-of-home” advertising experiences, including out-of-town building murals and portable shipping containers that offer an “immersive Minnesota experience” such as a canoe-in-nature scene or a drum kit at First Avenue.

“The campaign highlights the unique things that travelers can experience in our state and creates emotional connections that impact their future travel,” says John Edman, director and CEO of Explore Minnesota.

The campaigns might seem cute or gimmicky, but the organization cites studies showing a $75 return for every $1 they spend.

But do those numbers stack up? Carlos Torelli, an associate marketing professor at the University of Minnesota’s Carlson School of Management, says ROI claims like that are hard to assess.

“If you offer a promotion for a product—let’s say buy one and get one 50 percent off—you can easily assess return on investment by calculating the sales lift,” he says. “This is harder to do with advertising [for destinations], as the effects are longer term.”

Still, he suggests the campaign is likely to benefit the state overall.

“I think any ad campaign promoting the unique things in Minnesota can have a positive effect,” he says. “Minnesota isn’t a well-known destination [compared to] California, New York or Nevada. In this regard, increasing awareness among potential visitors is key for getting them to come here.”