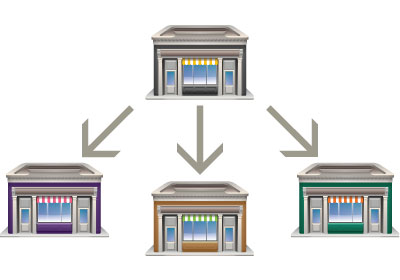 If you’re starting a business or expanding your company, franchising is an appealing option. But it’s not for everybody.
May 07, 2015

“I’m 57, and I haven’t been an employee since I was 16 years old.” Hoon says. “If I were an employee, I would probably be fired,” he jokes. In 2007, Hoon was a real estate agent specializing in new construction, while his wife, Barb, worked in the mortgage industry. Both of them, Hoon says “felt the slowdown coming” and thought that they needed to make a move.

“I wanted to own my own business,” Hoon says. “I learned a long time ago that I’m not a great inventor, but I’m a super copier. I didn’t want to risk my house on trying to see if something would work. I wanted to invest in something I knew would work.”

The Hoons now own four franchise businesses: Clothes Mentor stores in Maple Grove, St. Cloud and Woodbury, as well as a New Uses store in Maple Grove. Clothes Mentor is a women’s used-clothing chain, while New Uses resells used furniture and home dÃ©cor. Hoon admits that “a guy going into women’s clothing was kind of unique.” But it has worked for him so far. His 27 years of experience running a large sales office for vacuum cleaner company Kirby prepared him to handle the sales and employee management side of the business.

Franchising has worked for many companies and business people. Minnetonka-based NTY, the company that started Clothes Mentor in 2006, is one of 115 franchisors headquartered in Minnesota. In addition to New Uses, its other resale retailers are NTY Kids, Device Pitstop and NTY Clothing Exchange.

Operating a franchise can be appealing, and the choices can be overwhelming. Meanwhile, some business owners might find becoming a franchisor themselves equally attractive. But whether you’re looking to invest or starting your own business, what should you consider before pulling the trigger?

Franchisees: Coloring Inside the Lines

Hoon chose to work with NTY after meeting Ron Olson, NTY’s cofounder, who’d started the franchisor now known as Winmark, a Plymouth-based company whose franchise brands include resale stores Once Upon a Child, Play It Again Sports and Music Go Round. Though Clothes Mentor was a new business, Hoon says, “I had confidence in [Olson’s] past abilities to pave a path for that same kind of concept.”

There are several advantages to being a franchisee. Most notably, you’re working with a known brand. “The second you open, you get the benefit of that name,” says Jeffery Haff, a partner with Minneapolis law firm Dady & Gardner, whose practice focuses on franchisees. What’s more, Haff says, “certain franchisors do a good job of training you and helping you in setting up your systems, and [determining] what to buy.” That’s a particular advantage if you’ve never run your own business before.

But there are aspects of franchising to consider before ponying up tens of thousands of dollars for a franchise. Here are some salient pieces of advice that franchising experts cite:

Know yourself, and how much you’re willing to work. “You need to be self-aware,” Haff advises. “Understand your strengths and weaknesses. Then match them up with the type of business that you want to run.”

For instance, “every restaurant franchisee that I have ever met is a workaholic—[working] between 10 and 18 hours a day, seven days a week,” Haff notes. “If you go out to dinner with them, they are receiving two to three phone calls an hour from their managers telling them what is going on, asking for help and input. If you are a strong, hard worker and are willing to work 70 to 120 hours a week, a restaurant franchise might be right for you.”

Many of those considering franchises have come from the corporate world and are looking for a change. “A lot of people look at [operating a franchise] as buying themselves a job, basically,” Haff adds. “Well, if you are risking $400,000 [in a franchise fee] for the chance to make $80,000 [a year], maybe that is not such a cost benefit for you.”

Don’t think of it as your own business—at least not completely. Joseph Fittante Jr., a shareholder with Bloomington-based law firm Larkin Hoffman Daly & Lindgren, describes a good franchisee as “someone with an entrepreneurial spirit who is able to color [inside] the lines.” The franchisor sets up the system; the franchisee follows it.

“As a franchisee, you not only have to operate your own business, but [you have to do so] within the confines of the franchise system, so it is a compromise,” notes Fittante, who represents franchisors in his practice. “As an entrepreneur opening your own business, you don’t have any of those constraints and those issues.”

Fittante says the biggest headache for franchisors is the franchisee who buys into the system and then wants to change the way that it operates. A franchisor “has been there, done that,” Fittante says. “So when franchisees get into the system and want to change things, change the recipe for success, that is very frustrating.” Though some franchisors give their franchisees some leeway in how they advertise to their local market, most don’t want a franchisee altering the brand, whether that’s using the logo improperly or altering food recipes. If you’re a person who loves creativity and innovation, it might be best to start your own business.

Know how much risk you want to take. “If the corporate world is lower-risk and stepping out on your own as an entrepreneur is high-risk, I’d put franchising somewhere in the middle,” says Gaylen Knack, a principal with Minneapolis law firm Gray Plant Mooty who specializes in franchising law. “You are using your own money to fund it; the success of your business depends upon how you operate it. At the same time, you’re taking a framework that others have tried.”

Franchisees with a taste for higher risk and potentially greater reward might want to consider buying into a franchisor that’s newer, particularly one that is operating in a fast-growing market. That’s the advice of Lori Kiser-Block, managing director and partner at the Decide Group, an Eden Prairie consultancy, and a 20-year franchising veteran. (Most recently, she was owner and president of Edina-based Rapid Refill, which franchised stores selling and replenishing ink and toner cartridges.) Kiser-Block cites franchises catering to baby boomers, such as those offering in-home health care for seniors, as an example of a potentially high-growth franchise field.

Learn how much a franchise can cost. Do you have enough cash to buy the franchise—and then operate it? “One of the primary reasons people fail in franchising is they don’t start out with enough money or access to money to get through the tough times, and the opening and the first few months as people try to find them,” Haff says.

Do your due diligence. Franchisors are required to supply a franchise disclosure document, which contains information on the backgrounds of the executives involved in the franchise company and other information. Potential franchisees should review this to see if the franchisor’s leadership has a strong track record. The document also contains the names and contact information for those franchisees who have departed during the past year. Potential franchisees “should reach out to those people both in the system and those who have left the system and get their experiences,” Fittante says.

Attorney Knack is often approached by companies considering expanding their operations by becoming franchisors. “Oftentimes, someone will come up to them and ask ‘Hey, are you thinking about franchising this business?’ ” Knack says. Currently, he’s working with a couple of companies exploring that option: a manufacturer of electric bikes seeking to franchise sales and service operations, and a company supplying fire-protection services to commercial buildings.

In helping a client determine whether a franchise model makes sense, Knack asks potential franchisors three questions. First, can the business be duplicated? Fast-food restaurants are famous for systems that lend themselves to easy replication. On the other hand, there are businesses that are tied to the founder’s personality or a particular skill that he or she has. Chef-driven fine dining establishments, for instance, aren’t good candidates for franchising.

Knack’s second question: What aspects of the business, such as proprietary software or other trade secrets, can be protected in order to block copycats? A would-be franchisor should be able to articulate what makes the business distinctive. As Knack puts it, “What can I do to make my burger chain special?” A franchisor also should have a strong and legally protected trademark.

Then there’s Knack’s third question: Have you been in business long enough to prove that it’s successful so that two different parties—you and a franchisee—can earn a living?

These questions are important, Knack says, because “it costs money to franchise. It’s a regulated industry. It’s costly if you can’t sell franchises, or if the franchisees can’t be successful.” A potential franchisor should also understand that the relationship between franchisor and franchisee is different from that of employer and employee. A franchisor can’t simply “terminate” a franchisee in the same way many businesses let people go because they are employees “at will.”

Franchising expert Kiser-Block raises another key consideration: “Can you clone it?” That triggers an analysis of whether your business can work anywhere, and whether a franchisor can train others to run the business. A potential franchisor should be able to provide a franchisee with an adequate return for their investment. Though many franchisees might be workaholics, Kiser-Block is skeptical that many people want to live that way: “Who wants to work 80 hours a week?”

A potential franchisor should be aware of the many legal and financial ramifications. Chad Olson, NTY Franchise Co.’s cofounder and chief operating officer, notes that legal filings are “quite extensive.” A franchisor needs to hire attorneys to help draw up a franchise disclosure document and a franchise agreement, both required by the Federal Trade Commission. These documents cover multiple topics, including site selection, assistance in putting together a business plan, training on how to run the business and many other franchisor responsibilities. The FTC also will want to ascertain that a franchisor is well-capitalized and not a fly-by-night operation that might leave franchisees who’ve invested tens of thousands of dollars in the lurch.

A successful franchisor also “needs to understand that franchisees are not direct employees,” Olson says. “They are individual entrepreneurs and need to be treated as such.” True, they also have to follow the franchisor’s clearly laid-out standards and practices. But, he adds, “it is imperative you have the credibility so they take your advice and follow your plan so they can be successful.”

Mark Hoon, who operates two of Olson’s company concepts, has found NTY to be supportive. “There’s a genuine feeling of care that comes from corporate,” Hoon says. “They want you to do well.” So far, so good, for both franchisor and franchisee.