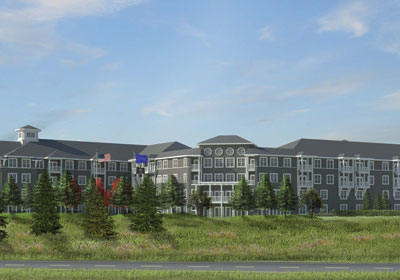 The Waters Senior Living LLC, a Minnetonka-based developer and operator of senior rental facilities, has been pitching a new project in Excelsior for the last 18 months. It’s been a long road.

In June, the Excelsior City Council nixed the 108-unit project. Although the vote was 3-2 in favor of the project, the city’s code required four votes for a planned unit development, a planning classification for larger projects with a mix of uses. The project’s four-story height was an issue for opponents, who questioned the scale of the project. Council members who voted against the plan said that they would perhaps support scaled-back, three-and-a-half story proposal.

On Monday, July 18, the city council again took a 3-2 vote on the project. But despite taking the same exact vote, this time it meant the project was approved. The developer made no changes to the design or proposed height. What changed? City staffers discovered that the city code requiring four votes was not valid under state law.

“Some of the council members had a hard time with seeing a four-story building approved,” said Kristi Luger, Excelsior’s city manger. “It really came down to the mass and scale of the building, which is the part that was difficult for the council.”

Jay Jensen, senior vice president with The Waters Senior Living, said that his group hopes to be able to break ground on the project in late fall. Jensen estimated the total project cost at nearly $30 million.

The Waters group did add 22 affordable units to the proposed Excelsior project. Jensen said that 94 of the units will offer independent assisted living; 14 will be memory care units. The Waters has eight senior living projects in Minnesota: seven in the metro and one in Rochester. Its newest project just opened in White Bear Lake.

At 57 feet high, the planned project will become the tallest building in the city of Excelsior, which retains a small town atmosphere. The site is currently home to an empty commercial building that once housed a restaurant and an apartment building that still has some tenants.

“Both buildings are quite dilapidated,” said Luger.

The developer has requested $2.5 million in tax increment financing from the city for the project. Luger said that the council has signed off in concept on the TIF subsidy. Jensen said that the TIF will help pay for demolishing the existing buildings and public improvements such as sidewalk enhancements. He noted that 30 percent of the two-acre site will consist of green space.

Another twist in the project’s path was that the former restaurant building and the apartment’s parking garage both sit in the city of Shorewood. Plans call for Excelsior to annex that land. The proposed agreement calls for Shorewood to get 60 percent of the property taxes from the annexed land, with the other 40 percent going to Excelsior. Luger notes that as part of the deal, Shorewood would pay 60 percent of the public safety costs for police and fire services at the site.

The project site is only a block away from the new Kowalski’s Market & Wine Shop, which opened in the summer of 2015 – an important resource for future residents.

“They can walk right to Kowalski’s,” said Jensen.

Despite the debate over the building’s height, Jensen said that he has been hearing from area seniors who would like to live in the building: “We’re already getting a lot of calls and interest from people.”