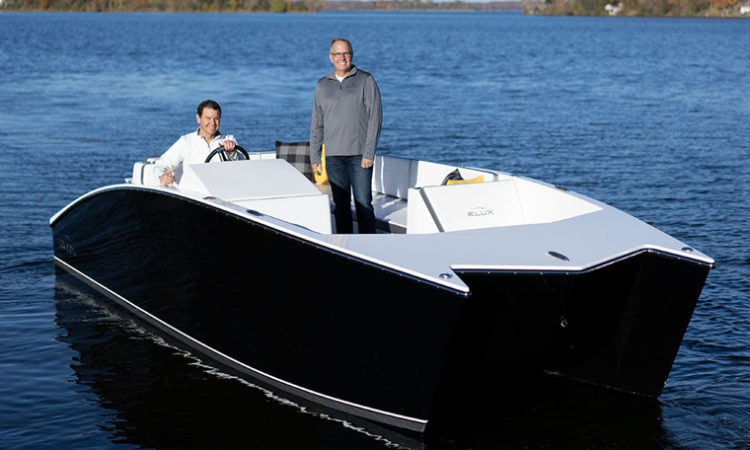 “This is really tailored for Minnesota lakes,” says Root of the Elux Marine pontoon. “It’s designed for a three-hour sun cruise, not to be a boat you take down a river or across the ocean.”
By Sam Schaust
January 16, 2019

To unplug from the stress of running Vascular Solutions, company CEO Howard Root often sectioned off part of his weekends to customize boats in the workshop of craftsman and friend, Bart Jones. Their first project: Retrofitting a Gulf of Mexico fishing boat into a vessel to ride up the Mississippi River and putt around Lake Minnetonka.

All that time in the workshop led Jones to share with Root a pet project he’d been developing over the years for an electric pontoon.

“That was 2017—right after I won my case and was still working at Vascular Solutions,” Root tells TCB. In February of that year, Root inked a deal to sell the Maple Grove-based medical device company for $1 billion. At the time he cited the multi-year legal battle he endured against the federal government as his chief reason for exiting the industry.

Within months of his retirement, Root and Jones began work on their electric pontoon prototype. Using an old, rust-smacked pontoon—nicknamed the “Rat Rod”—the duo striped out the boat’s original engine and replaced it with an electric motor, drive and battery. From Lake Minnetonka, they gave their prototype its first trial run.

“There I was with this really ugly pontoon boating around that summer and lo and behold it did really well,” says Root. “It proved the concept, so we went forward and built the commercial version.”

Later this month, at the Minneapolis Boat Show, Root and Jones will unveil their creation: the world’s first electric luxury fiberglass pontoon.

Designing with Minnesota in mind

Elux Marine, the Mayer-based company Root and Jones are selling their boats under, will manufacture just four boats in its first production year—one for Root and three for early adoptors. First dibs on the cutting-edge watercrafts will be at the Minneapolis Boat Show and available only to residents of Minnesota or western Wisconsin. Delivery of the boats will occur in May.

The regular going rate for an Elux Marine pontoon will be $85,000, but its first-year models will sell for $75,000. Prices are subject to shift in 2020, Root says, when the company introduces some ability to customize the boat and potentially strip out certain features.

Features of the Elux electric Pontoon

“For the first year it’s kind of the Henry Ford motto: Any color as long as it’s black,” jokes Root.

Based on its design, Elux is branding its 24-foot electric pontoon as something tailored specifically for Minnesota lakes.

“The problem is most boats out there are designed for the big water and then they try to sell them here,” says Root. “[Our pontoon is] designed for a three-hour sun cruise, not to be a boat you take down a river or across the ocean.”

Using a 72-volt, 420-amp lithium battery-powered electric engine, the Elux pontoon can last for over ten hours at cruising speed on a single charge. At its peak, the boat is capable of reaching speeds of up to 14 miles per hour.

Charging the engine’s battery is as simple as plugging it into a standard electrical outlet, and will take about 12 hours to charge from half to full. Stacked up, Elux’s pontoon’s battery pack is about one-third the size of what’s used in Tesla vehicles, says Root, who is also a Tesla owner. Another Tesla similarity: Elux pontoons utilize a smart charger system to make sure its battery never overcharges or drains to a point of causing long-term damage. 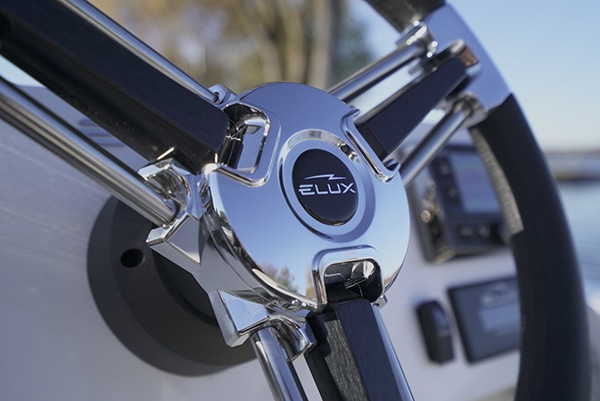 The Elux brand features a lightning bolt as a nod to its use of electric power. (Photo courtesy of Elux Marine)

Root admits: “I never really liked the look of pontoons. It’s just barrels with a dance floor and a living room stapled to it.” The Elux pontoon, rather, is more structurally akin to a speedboat.

The round barrels, a trademark feature of every pontoon, are instead integrated into the hull of the Elux pontoon rather than under it. This, among other design innovations, allowed Elux to give its pontoon a more unique shape.

“When I started my design work five years ago, I asked myself a simple question: What if a pontoon didn’t look like a pontoon?” says Jones. “I sought to create a pontoon that was tailored for lake cruising but was also sleek and stylish. The first step was to integrate the pontoons into the hull and the final result is the Elux pontoon—a boat that meets the pontoon cruising needs for Minnesota lakes with a design that uses clean, simple lines to make a bold statement.”

Minnesota has long ranked as one of the nation’s top spenders when it comes to boating. Sales of boats have grown every year over the last eight years in Minnesota, according to the National Marine Manufacturers Association, and in 2017 totaled $807 million—a more than 12 percent increase over the year prior. All in all, only four other states spend more on boats than Minnesotans do.

Root believes that passion, compacted with the innovation he and Jones are driving through Elux, will drive sales over time.

“I’m not saying we’re going to be the next Bennington boat company,” he says, “but we want to have a nice boat that people like that we do in small numbers and do very well.” 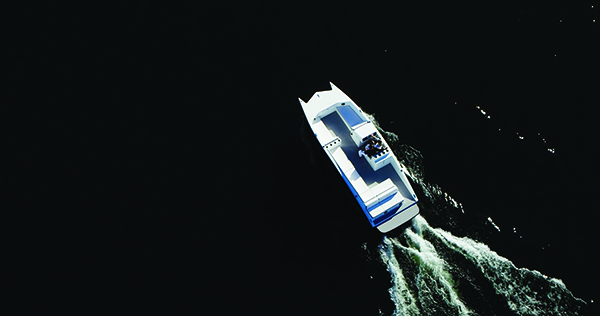