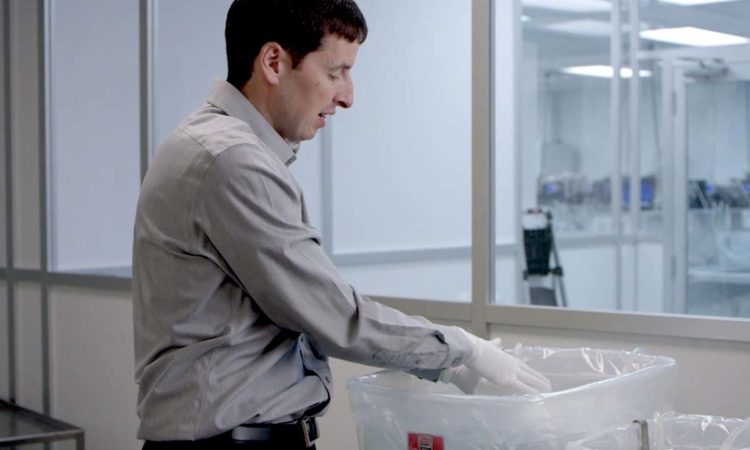 Miromatrix CEO Jeff Ross at a lab in a 2017 video. Vimeo

After a “successful” preclinical trial with pigs, the medtech firm hopes to test out the implants in humans sometime in 2022.
By Dan Niepow
October 07, 2021

On Thursday, the company announced that it successfully implanted a “bioengineered liver transplant” into five pigs with liver failure. The work was part of a preclinical trial carried out in partnership with the Mayo Clinic. According to a news release, the study “showed the pigs that received the bioengineered livers maintained detectable hepatic health in the graft, sustained blood perfusion, and demonstrated early liver function post transplantation.”

Miromatrix leaders say the news is potentially groundbreaking for those waiting on liver transplants. In a report on the study in scientific journal Communications Biology, researchers said that the company’s technology could one day offer “a virtually limitless supply of bioengineered liver grafts.”

“Liver transplantation currently represents the only curative therapy for acute and chronic liver failure,” the report said. “However, access to this treatment is limited by a persistent shortage of donor organs.”

In the release, Miromatrix noted that as many as 114,000 people in the United States are currently waiting on an organ transplant.

CEO Jeff Ross said that the study provides an important “proof of concept” for the company’s technology.

“Now that we have demonstrated our technology in a large animal model, we are targeting our initial human clinical trial with an external liver in the second half of 2022 for acute liver failure, bringing us closer to our goal of eliminating the organ transplant waitlist,” Ross said in the release.

The release noted that the human trials will be carried out “via an external application.”

In June, Miromatrix joined the throng of newly minted public companies when its shares began trading on Nasdaq. The company’s initial public offering, or IPO, added more than $43 million to its coffers.