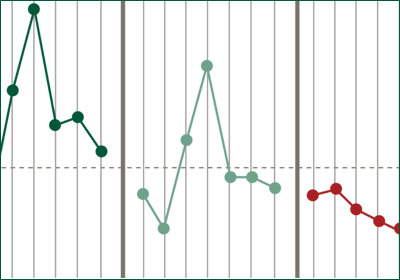 Minnesota business leaders plan to scale back this quarter due to politics and taxes, among other factors.
By TCB Staff
February 01, 2013

Minnesota’s economy will likely regress this quarter as pessimism about its business climate has more than doubled from one year ago at this time, according to Twin Cities Business’ quarterly economic indicator survey sent to more than 15,750 businesses across the state.

Results from the survey—which asks business leaders about their plans for the next three months—are used to tabulate the Minnesota Economic Outlook Index. For the first quarter of 2013, the index dropped to 49.9, down from 51.2 in the fourth quarter of 2012, 53.2 in the same period one year ago, and an average of 53 during all of last year. An index above 50 indicates economic expansion; below signals contraction.

The current index reflects a slight scaling back of early 2013 budget plans by many business leaders. The survey behind it was conducted in mid- to late December—before “fiscal cliff” fears were at least temporarily alleviated and after the November elections. The second term of President Barack Obama and Minnesota’s Democratically controlled state legislature and Democratic governor has made some business leaders pale with fear. Such sentiment was voiced frequently in the survey’s write-in responses.

“Even if we do not go over the fiscal cliff (and going over might not be a bad thing), much of the damage is done for 2013,” one respondent wrote. “Until we get some clarity out of Washington, businesses are going to take a wait-and-see approach and the appetite for risk will continue to be low.”

Asked “What do you anticipate as your biggest business challenge within the next three months?” the most common response in this quarter’s survey was government’s negative impact on business via increased taxes, regulations, and political showdowns where nothing constructive occurs.

“We are an S Corp., so expected tax hikes from the state and federal government will reduce our return on equity, which reduces the owners’ appetite to invest in the company or hire,” one respondent wrote in answer to this question. “Additionally, there’s a confrontational relationship with regulators at the state and federal level. Job creators are treated as the enemy.”

“Taxes, taxes, taxes. We are a small powder-coating paint job shop. We pay more than $12,500 per year in unemployment tax; our 25 percent income tax is going up to 33 percent. Thinking of moving to South Dakota,” was another respondent’s answer.

The two other most common answers to the “biggest challenge” question had to do with how to grow revenues, manage growth, and take on increasing competition; and finding qualified talent while improving retention, focus, and productivity with current employees.

Such sentiment shows up in survey data. The percentage of respondents who expect business conditions in Minnesota to worsen by March 31 (25 percent) is more than twice what it was a year ago and is the highest it has been in four quarters, while the percentage of respondents expecting conditions to improve (30 percent) is the lowest during the same period.

Hiring is also expected to slow this quarter. Some 30 percent of respondents plan to increase full-time payrolls during the quarter, again the lowest percentage since fourth-quarter 2011. Worse is that 10 percent of respondents plan to reduce employment levels—the highest level of intended layoffs since the third quarter of 2011, when this survey began.

See related tables on pages 2 and 3.

Twin Cities Business conducts the quarterly economic indicator survey to provide a look at business planning and sentiment among leaders across all industries in Minnesota. Answers from 11 questions are used to formulate the Minnesota Economic Outlook Index, the only indicator of what business leaders across the state are planning for the immediate quarter.

An email link to an online survey was sent to 15,750 Minnesota business leaders in mid-December and a reminder email was sent the following week to those who had not yet completed the survey. The Minnesota Chamber of Commerce provided some of the email addresses used in this outreach. As of December 20, 571 businesses responded, resulting in a 3.6 percent net response rate. Of those who responded, 86 percent represented privately held businesses.

Breakdown by Industry and County