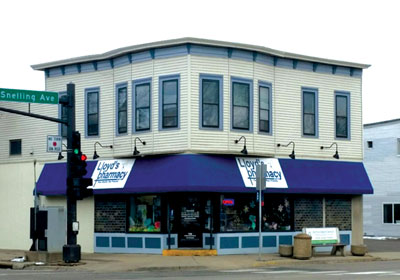 How does an independent pharmacy battle the giant chains?
May 07, 2015

With the budget and the footprint to offer drive-throughs and 24-hour service, chain drug stores have put the squeeze on independents. In 1992, indies accounted for half of all community pharmacies in Minnesota, but by 2012 they only accounted for a quarter, according to a University of Minnesota study.

Lloyd’s by the Numbers

Pharmacist Jim Stage perhaps states the obvious when he asserts that indies consistently outperform the chains in customer service. “You get to deal with the same people day in and day out,” he says. “When you go to a chain, the person you talked to yesterday might not be the person you get today.”

Stage cut his teeth at CVS, but bought Lloyd’s, the independent St. Paul pharmacy where he worked, late last year, and soon after purchased Schneider Drug in Minneapolis.

Stage’s belief is that independents are more willing to tailor their services to suit the needs of individual customers. “If you can’t get to our store,” he says, “we’ll bring it to you.” More than a third of Lloyd’s prescriptions are delivered, warranting four drivers.

Pharmacies receive price breaks on larger-quantity prescription drug orders. While Walgreens and CVS can leverage their roughly 16,000 stores, many independents, including Stage’s, use buying groups to leverage lower wholesale prices. An average Walgreens is 14,500 square feet, 11,000 of which are devoted to non-pharmacy items. Lloyd’s is 1,000 square feet, and half of that is pharmacy.

Stage admits the modern pharmacy is at the mercy of insurance companies, which “set our profit margin.” Margins are better on generics, but Stage brings in name-brand drugs for customers who want them. “We’re interested in the long haul,” he says, “not the short-term gain.”

When a longtime pharmacy owner-operator retires, if a replacement pharmacist isn’t available to buy the business, a chain will simply buy its customer list. One way that Stage wants to help keep independent pharmacies alive (other than purchasing them himself) is through outreach to pharmacy students. “We want to get students re-interested in the independent business,” he says, “and its value to the community.”