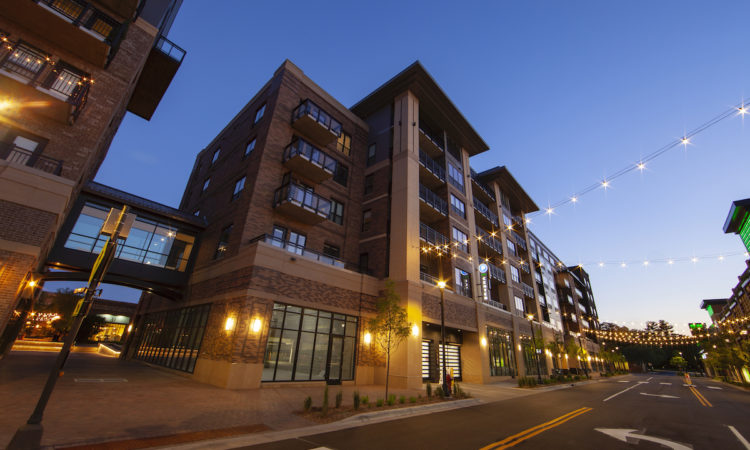 The century-old men’s store is the latest local business to sign on at the new Nolan Mains development.
By Allison Kaplan
October 20, 2020

“We want to create some sales, but that’s almost secondary,” said Robert White, president and CEO of the high-end clothier founded by his grandfather in 1916. “We want to reach out to clients who are not going downtown right now, and to people who aren’t familiar with us—it’s hard to believe after 104 years, but new people discover us every day.”

The Hubert White flagship at IDS Center is currently open by appointment. “There’s no casual traffic—travelers, convention-goers, it’s not there,” White said. In recent weeks, White said he’s noticed a slight uptick in traffic with some downtown workers returning to offices, but not enough to offset this year’s dramatic drop in business. Adding to the downtown challenges, even today’s destination shoppers are less likely to be in the market for a suit, which is Hubert White’s sweet spot. The Edina pop-up will focus on casual apparel.

It’s been decades since Hubert White ventured into the suburbs. The family owned store, which started in St. Paul and opened a downtown Minneapolis store in 1936, had a location at Ridgedale Center in the earliest years of the Minnetonka mall.

White, who lives in Edina, said he was contemplating a holiday shop outside of downtown when he was approached by longtime customer Peter Deanovic, principal of Buhl Investors, which is leasing the retail portion of Nolan Mains. The residential and retail development located on the backside of 50th Street includes underground parking and an open plaza. Soul Cycle, the New York-based fitness chain with a cult-like following was early to sign on at Nolan Mains for its first Twin Cities location. That was before Covid-19. Signs in the windows along Market Street say “Opening fall of 2020,” but construction has yet to begin. “We’re hopeful they’ll chose to open in second quarter of 2021,” Deanovic said. Basecamp Fitness is now open at Nolan Mains, as is the Lynhall No. 3945 restaurant.

“Delivering 30,000 square feet of retail today may seem nuts,” Deanovic acknowledged. “But at 50th and France, and with the co-tenancy we’re going after, we believe it will have a long life to it.”

Long considered one of the most desirable neighborhood shopping districts with a mix of established local boutiques, unique restaurants, and popular nationals like Paper Source, Athleta, and Anthropologie, 50th & France is currently sitting at its highest vacancy rate in the last seven to 10 years, said Stefanie Meyer, a senior vice president and principal with Mid-America Real Estate. One of the latest high profile closures on the corner was Sur La Table, which declared bankruptcy in July.

But Nolan Mains has announced several openings in the midst of the pandemic, starting with a second location for the Lynhall, which opened in August, and three local retailers scheduled to open in October and November. For Stranger & Co., which started selling one-of-a-kind home good products online in 2019, Nolan Mains will be a first brick and mortar location. Flirt Boutique, a St. Paul-based lingerie shop, plans to make Nolan Mains its flagship store and turn its original Snelling Avenue location into a monthly pop-up. And the new 50th & France development marks a second location for Six for Good, a collective boutique featuring lifestyle merchandise from six women-owned brands. Six for Good launched at Rosedale Center in 2019, and founder Lauren VanScoy said sales at the mall store are up this year, giving the co-owners faith in the future of brick and mortar—particularly for local merchants.

“Nolan Mains is extremely appealing because they’ve done an amazing job of intentionally curating the space to include a select group of retailers and restaurants with unique stories, product offerings, and small business energy,” said VanScoy, owner of Essence One skincare line.

Neither VanScoy, nor Lynhall owner Anne Spaeth divulged lease terms, but both described the negotiations and “thoughtful and flexible.”

“Pete took the time as a developer to really understand what the pressures are on today’s restaurants and retailers and was thoughtful in setting up lease terms which were beneficial to the long-term success of both our companies,” said Spaeth, who added that business in Edina has been “amazing” thus far, with both indoor and outdoor seating.

Nolan Main’s developers don’t want capital expenditures—building out a store or restaurant—to “become the barrier” to leasing, Deanovic said. He acknowledged that Nolan Mains is spending more upfront to assist with construction and flexible terms than anticipated prior to Covid-19. But he sees it as the acceleration of a market shift that was already underway.

“Lease structure has been evolving, pre-coronavirus,” Deanovic said. “Attracting the consumer today is predicated on sense of discovery, experience. That can’t be achieved with a bunch of 10-year leases and national brands doing five stores in the Twin Cities.”

The tenants that have signed on thus far fit with Nolan Mains’ original vision of attracting first-to-market and digital first brands as well as unique local businesses. “We’re generally holding true to the framework we detailed at the outset,” Deanovic said. “The difference is that while we probably anticipated larger retail suites—2,000 to 4,000 square feet—we’re now finding that local vendors desire something sized closer to 600 to 1,200-square feet. That’s honestly a great outcome because it means more offerings, which drive a greater sense of consumer discovery.”

Nolan Mains is also playing up the smaller storefronts and outdoor setting as better equipped to manage the Covid-19 risk than an indoor mall. “These things matter today, and we’re seeing foot traffic in outdoor centers recovering faster than enclosed malls.”

Over the holidays, Nolan Mains will offer weekend horse and carriage rides and ice carving exhibitions, Deanovic said. “We can deliver the ability to get out of the house in an outdoor setting and offer an engaging, immersive experience.”

That was a big part of the location appeal to Six for Good, VanScoy said.

“They have fun, outdoor, socially distanced activities planned over the holidays,” VanScoy said. “It’s going to feel like a little village to spend your evening, take care of holiday shopping, have some dinner, and support small businesses—all in one.”