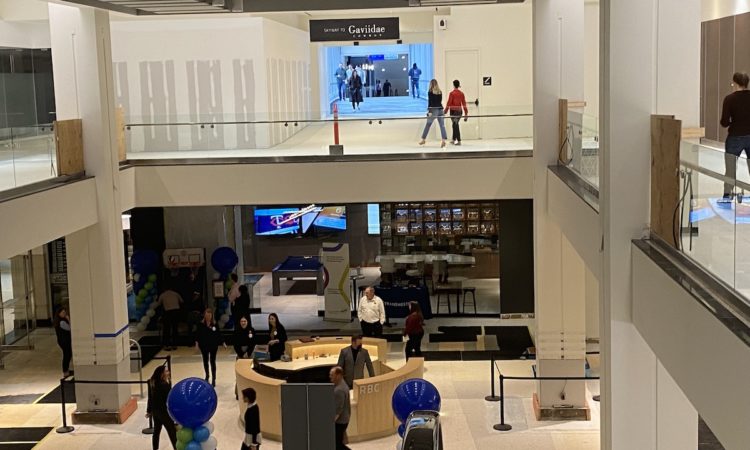 Veiw from second floor of the RBC Plaza in Downtown Minneapolis Tuesday, March 29, 2022.

After a pandemic-induced plateau at the turn of the year, the downtown workforce is slowly returning to the skyways.
By Winter Keefer
March 30, 2022

Life is slowly returning to Minneapolis’ downtown commercial buildings, bringing a flow of foot traffic back through the city’s vein-like skyway system.

March has served as a target return month for many major downtown employers, including Wells Fargo, U.S. Bank, and Sleep Number Corp.

On Tuesday, Mike Salmen, a managing principal for Transwestern, could be found corralling office workers passing through the second floor of the RBC Plaza. He’d rout them down to the first floor where they could play “Pop It Basketball” and enter into a drawing for prizes. At some point, men and women in business attire pulled out cornhole.

The pop-up games were part of the Building Owners and Managers Association of Greater Minneapolis (BOMA) Block Builders campaign, which was launched this week to celebrate returning workers and to capitalize on the excitement around the Women’s NCAA Final Four coming to town on April 1. Participants in the event include 50 South Sixth, Wells Fargo Center, RBC Plaza, Capella Tower, US Bank Plaza, US Bancorp Center, City Center, and The Dayton’s Project.

While it is Traswestern’s goal to see as many people return to the office as possible, Salmen acknowledged that many do not want to return to full-time, in-office work.

“It’s a little bit of a test,” he said. “I think that the buildings need to provide a reason for employers to come back.”

Transwestern, a Houston-based commercial real estate management agency that handles leasing for many of the large buildings downtown, returned to the office mid-year 2021, which has given the company a unique perspective on the status of downtown. Just about 30 percent of downtown workers had returned to their offices at the turn of the year, but with the omicron variant, that number plateaued. Only in the last month has Salmen seen an uptick again.

As of mid-February, about 41 percent of the usual downtown workers had returned to their offices in some capacity, the Minneapolis Downtown Council said at its annual meeting. Now, Salmen estimates that number is approaching 50 percent. More people come in mid-week, with the highest foot traffic on Tuesday, Wednesday, and Thursday, and the lowest on Mondays and Fridays. Still, few workers are returning to the office five days a week as they did in the pre-pandemic days.

“We’re seeing a lot of large corporations make the decision to get their people back to work,” he said. “As that happens, a lot of small companies start to follow and, with that, we see a lot of our retail vendors are able to make the decision to open up. It’s been a real challenge because we’ve had limited retail service with lighter crowds coming downtown.”

Tom Goudreault, an employee of BRIGHT Research Partners – a research institute located in the Baker Center – said he has enjoyed seeing people return to downtown.

Goudreault would work from the office a few days a week through the pandemic, but he was usually the only one around. Over the past few month, the company has brought back more workers and will soon return to a more regimented schedule. 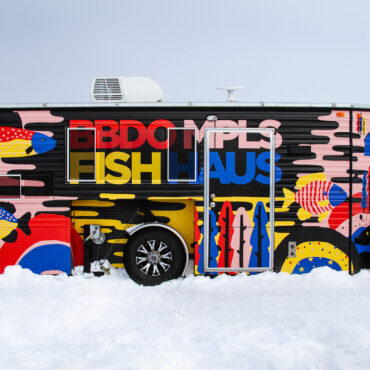