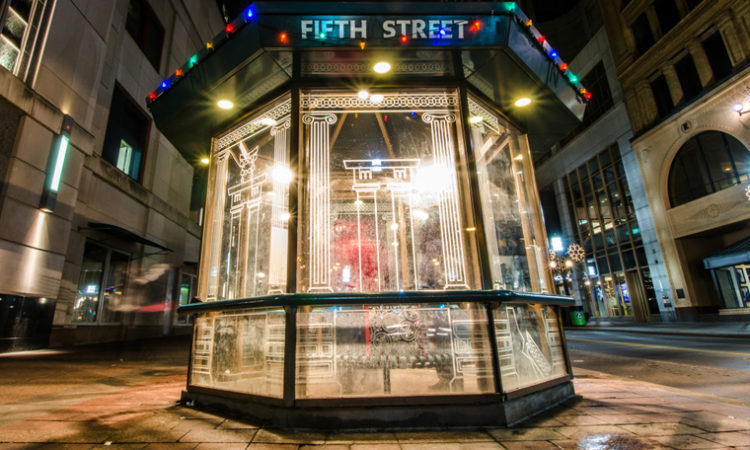 The plan focuses on drawing retailers to a five-block stretch of Nicollet Mall.
By Burl Gilyard
January 25, 2019

Retail in downtown Minneapolis has faced mounting challenges for decades. That’s why the Minneapolis Downtown Council announced Friday the launch of an effort to draw brick-and-mortar retailers to the city’s central business district, particularly along the five-block stretch of Nicollet Mall between 5th Street and 10th Street.

The last department store in downtown Minneapolis, Macy’s, closed its doors in early 2017, ending a retail legacy that began more than a century ago as Dayton’s. Barnes & Noble exited its Nicollet Mall store in 2018. But on a positive note, a new Nordstrom Rack store opened at the IDS Center in September 2017.

The council set up a retailed-focused task force in 2016 to start work on the issue. On Friday the business association released its first-ever “Yes Minneapolis Downtown Retail Report,” intended to help draw retailers. The effort is focused on the Nicollet Mall between 5th Street and 10th, Street, historically the core of downtown shopping. While the North Loop is a booming area, the retail there is primarily boutique-scale stores.

“There was a feeling that there still needed to be a retail identity for Nicollet,” said Steve Cramer, president and CEO of the Minneapolis Downtown Council.

Plans include a new coordinated marketing effort of the retail district along the Nicollet Mall, creating a “comprehensive data source” to promote the area and setting up an alliance of various stakeholders who will meet regularly. Cramer sees the city’s $50 million redesign and reconstruction of Nicollet Mall—completed in late 2017—as an asset to attract new retailers.

“We need that high-end department store anchor down here and then we can build from that,” says Andrea Christenson, a veteran retail commercial real estate broker and vice president with Cushman & Wakefield/Minneapolis-St. Paul. “Any retailer who’s going to be a game-changer is going to be on Nicollet Mall.”

Christenson notes that Bloomington’s Mall of America, which opened in 1992, changed everything for downtown retail.

“Had Mall of America not been there would Apple have come downtown? I argue they would have,” says Christenson. “When Mall of America got built, that’s when things changed.”

There have been many past unsuccessful efforts to revive Minneapolis downtown retail. What makes this effort any different?

“I just think the environment keeps changing on us, so we have to keep trying,” said Cramer. “I think retail needs to be a part of the downtown experience.”

But he acknowledged that simply announcing a new strategy and issuing a report won’t magically revive downtown retail.

“At the end of the day some broker on behalf of some owner needs to land a tenant,” said Cramer.