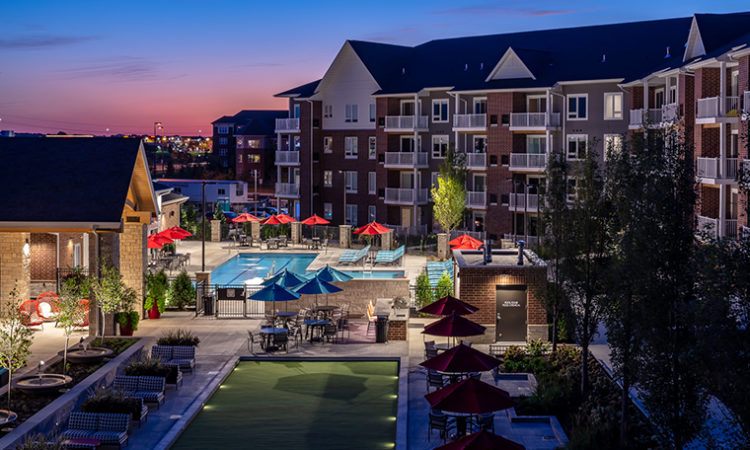 The new financing backs three properties, including the Reserve at Arbor Lakes in Maple Grove. (Image courtesy of Doran Cos.)

New loans for three of its market-rate apartment projects
By Burl Gilyard
July 09, 2019

Bloomington-based Doran Cos. has landed approximately $200 million in long-term debt on three of its market-rate apartment developments totaling nearly 1,000 units in the metro. The new financing backs The Reserve at Arbor Lakes in Maple Grove (255 units), The Moline in Hopkins (239 unit) and 610 West in Brooklyn Park (480 units).

The new loans are referred to as “permanent debt” because they replace short-term construction loans on the projects. Nuveen Real Estate provided the financing. Nuveen is owned by New York-based TIAA, a large financial services organization. TIAA was formerly known as TIAA-CREF, which stood for the Teachers Insurance and Annuity Association of America-College Retirement Equities Fund.

“Now that these projects are done and they’re performing very well, we were able to refinance the projects and replace the construction debt with permanent, long-term debt,” says Anne Behrendt, president and CEO of Doran Cos. “It’s always our strategy to secure long-debt after a project is stabilized.”

Earlier this year, Doran Cos. founder and partner Kelly Doran sold a majority stake in the firm to two of its top executives. Behrendt now owns 51 percent of Doran Cos.

Two additional buildings will be added to The Reserve at Arbor Lakes project. Pre-leasing for the second building is slated to begin in August; Doran Cos. will start construction on the third building before the end of the year.

”This really positions us well to continue to invest in new projects in the market,” she says.

Kelly Doran is among five new inductees named by Twin Cities Business to the 2019 Minnesota Business Hall of Fame.