When it comes to planning a memorable meeting or a compelling conference, it’s all about the location. Here are 10 unique event spaces that will impress guests and unleash creativity.
By Melinda Nelson
June 01, 2016 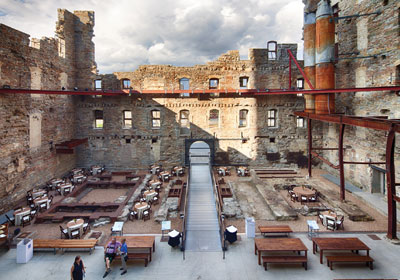 The Twin Cities metro region is filled with unique venues for business meetings. Off-site gatherings, for individual companies and industry sectors, offer people a chance to gain a fresh perspective.

To encourage new thinking, Twin Cities Business is taking a look at venues that are one of a kind. Some overlook water and others are in urban centers.

We are profiling 10 enterprises in Minneapolis, St. Paul and surrounding suburbs that offer beautiful and distinctive physical surroundings. These meeting locales range from the historic Mill City Museum in Minneapolis to the newly constructed Securian Club at CHS Field in St. Paul.

Learn more about the architecture, ambience, amenities and food that you can expect to experience at notable Twin Cities venues.

When VIPs, dignitaries and luminaries are on the guest list, the Minneapolis Club is the ultimate spot for a meeting of the minds. Founded in 1883 by John Pillsbury, Charles Loring and other civic leaders as an English-style gentleman’s club, the private club has held court in its present location in downtown Minneapolis for well over a century. Choose from 17 beautifully appointed spaces in the four-story, ivy-covered brick building, including the gracious English-style dining room with a coffered ceiling, leaded windows, oil paintings in lavish gold frames and a fireplace. The catering menu features an array of inventive farm-to-table specialties, fresh seafood (a perfectly cracked snow-claw, anyone?) and carving stations with beef tenderloin with horseradish and BÃ©arnaise sauces, prime rib with Choron sauce, roasted pork loin with apple chutney, roasted turkey with cranberry compote, freshly baked rolls and other accoutrements.

For game-changing board meetings and other inspiring events, take over the James J. Hill Center on Rice Park in downtown St. Paul. Hill, known as the “Empire Builder,” envisioned the library as a place to answer any question “from the origins of art to the electric current, from the philosophies of the sages to soap.” Constructed of pink Tennessee marble and Minnesota sandstone, the Beaux Arts building was designed by New York architect Electus Litchfield, who modeled it after J.P. Morgan’s own library. For small, private summits of 12 to 18 people, select the stately Empire Builder room, the Great Northern Room or the Glacier National Park Room. For cocktail receptions, state dinners and conferences with 200 to 300 guests, choose the breathtaking, book-lined Reading Room. Catering is available for the Reading Room and outside food is allowed for the smaller meeting spaces.

For blue-sky brainstorming sessions and other creative meetings, heed the call of naturalist John Muir, who observed, “In every walk with nature, one receives far more than he seeks,” and take the team to the Minnesota Landscape Arboretum in Chaska. Established by the University of Minnesota Horticultural Research Center in 1958, the arboretum includes 1,200 acres of gardens, woodlands, wetlands and prairie, with nearly 13 miles of walking paths and hiking trails. A variety of meeting spaces are available in the modern Oswald Visitor Center including the MacMillan Auditorium, which seats up to 375 people, the Azalea Classroom, which seats up to 30, and the Carlson Dining Room, which seats up to 20. The historic Snyder Building includes an auditorium which seats up to 180 people, the Fireplace Room and the Tea Room, which both seat up to 50, and other spaces. Catering is available through the Arboretum CafÃ©.

If the guest list includes executives, opinion leaders and influencers who’ve never been to Minneapolis before, pull out all the stops and book the reception at Loring Social on the distinctive western edge of downtown Minneapolis. Situated on Hennepin Avenue with views of the Minneapolis Sculpture Garden and the Basilica of St. Mary, the building was once the Minneapolis showroom for Gatsby-style Stutz Bearcat sports cars. Choose from two impressive event spaces, both inspired by iconic New York landmarks. The glamorous Waverly room, which holds up to 165 people, features the original terrazzo marble floor, oversized vintage elevator doors and antique light fixtures, while the urbane Chelsea room, which holds up to 300 people, features a vaulted ceiling with 16 sparkling chandeliers, exposed brick walls and an industrial-style glass garage door that opens onto a European-style alley. Catering is available exclusively from D’Amico Catering.

The Securian Club at CHS Field

For events where all-American fun ranks high on the agenda, take your guests out to the Securian Club at CHS Field, home of the Saint Paul Saints minor league baseball team. Designed by Minneapolis-based Snow Kreilich Architects with a focus on sustainability, CHS Field has earned the title of the greenest ballpark in America. Inside, the 4,000-square-foot Securian Club, which seats up to 200 people, offers some of the best seats in the stadium. With outdoor seating on the first-base line and floor-to-ceiling windows on three sides, the club provides expansive views of the Saints’ legendary on-field antics, as well as St. Paul’s Lowertown and Dayton’s Bluff neighborhoods. Softball games, batting practice and other team-building activities are available, and catering can be arranged through the ballpark.

For strategic assignations that require a frisson of Manhattan-style glamour, only Prohibition will do. Situated on the 27th floor of the historic Art Deco landmark formerly known as the Foshay Tower, this sexy, swanky space was intended to be Wilbur Foshay’s private pied-Ã -terre-in-the-sky until the stock market crash of 1929—and ensuing Great Depression—put the kibosh on his plans and devastated his empire. As Foshay no doubt envisioned, the intimate, luxuriously paneled rooms with 360-degree views of the Twin Cities are perfect for out-of-the-box ideation sessions and other top-secret meetings. Choose from three spaces: Moon, which holds up to 20 guests; Shine, which holds up to 40 guests; or Moon-Shine, which holds up to 60 guests. In signature Wilbur Foshay style, Manny’s will deliver a magnum of Champagne, a sparkling three-tier seafood tower, freshly shucked oysters, Kobe beef sliders and other delicacies.

For business meetings that are anything but run of the mill (pun intended), the Mill City Museum is the place. Situated in the former Washburn A-Mill, the National Historic Landmark site is a star player in Minnesota history. Back when Minneapolis was the flour milling capital of the world, the mill produced enough flour for 12 million loaves of bread a day. In 1991, the abandoned mill was nearly destroyed by fire, but the ruins were artfully adapted by MSR Design and the Minnesota Historical Society. The museum opened in 2003. Choose from the Mill Commons, which seats up to 250 guests with mingling in the enchanting outdoor Ruins Courtyard, the ADM Conference Room, which holds up to 40, the Cargill Library, which holds up to 16 people, and other spaces. Self-guided tours of the Flour Tower and other exhibits are available. Catering is provided exclusively by D’Amico Catering.

For symposiums with an extra something-something, invite your attendees out to Lake Minnetonka for a day of meetings and golf at the elegant Lafayette Club overlooking Crystal and Lafayette bays. Designed by society architect William Channing Whitney in 1924, the Spanish-style clubhouse sits on 3,000 feet of hallowed lakeshore. In 1882, James J. Hill built the Hotel Lafayette, the Great Northern Railroad’s first summer resort, on the site, but a fire destroyed the hotel in 1897. Choose from the Crystal Bay Garden with outdoor seating for 250 people; the Crystal Ballroom, which seats 350; the Lakeview Room, which seats 250; the Fairway Room and patio, which seats up to 125; the Marquis Room, which seats 60; and other smaller, more intimate spaces. For a signature Lake Minnetonka experience, conclude the day with a sunset boat tour of Lake Minnetonka’s loveliest estates. Catering is available.

For electrifying conferences and magnetic events, invite your guests to the Bakken in the historic 1929 West Winds mansion near Lake Calhoun. Dedicated to the science of electricity, the museum is the brainchild of Medtronic founder Earl Bakken, who once chained his company’s policies and procedures manual to his ankle and then threw it in the fire to inspire his employees to think outside the box. For a large gathering, book the entire mansion, which includes the Terrace Rooftop with views of Lake Calhoun, the Florence Bakken Medicinal Garden and the Dakota Native Plants Garden. For more intimate get-togethers, choose the Franklin Room, which seats up to 12, the Great Hall and Sunroom, which seats up to 80, or the entire main level, which holds up to 100 people. Two classrooms are available—the Galvani, which seats up to 40, and Volta, which seats up to 90. Catering is available from an approved list of vendors.

For a casual and convivial confab, consider the natty and nautical Pool & Yacht Club overlooking the Mississippi River in Lilydale. Built in 1955 and fitted with polished wood paneling, a ship’s wheel set into the ceiling, restrooms for “gulls” and “buoys,” and no yachts, the club glows with mid-century style and humor. Choose from the Binnacle, a circular room with views of the river, which seats 20; the glass-enclosed Captain’s Room which seats 30 people; the 843 room (named for the club’s location on river marker 843), which seats 85; or the 50-seat Admiral’s Room and adjoining patio and bonfire pit. Several of the rooms may also be combined for larger groups. The club menu features delicious supper club classics including Brown Derby cobb salads, pot roast with mashed potatoes, beef stroganoff with wild rice, chicken Oskar and other delights. tcbmag