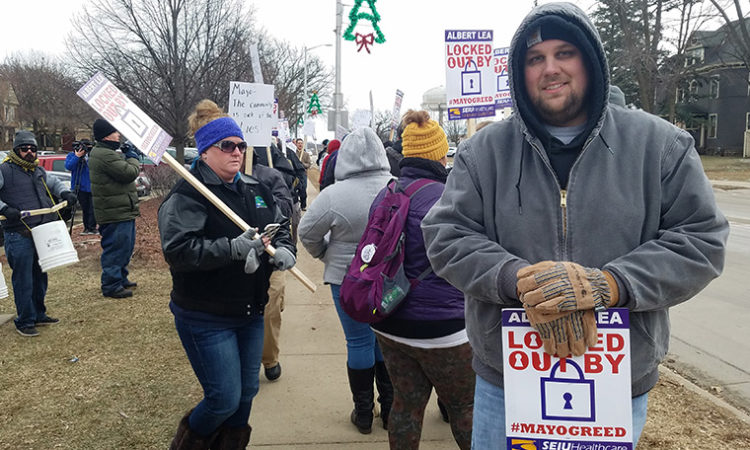 Utility worker Justin Yost, who participated in the strike and was in the picket line Wednesday, has has worked at the Mayo Clinic for more than 15 years.

The sticking point is whether Mayo would then gain the ability to make changes to the benefits packages unilaterally, be they additions or subtractions to the current plans.
By Jared Goyette
December 20, 2017

The Mayo Clinic’s Albert Lea hospital locked out about 100 maintenance and utility workers Wednesday after they participated in a one day strike on Tuesday.

The workers, members of SEIU Healthcare Minnesota, will be able to return to their jobs on December 26, after temporary replacement workers complete a one week contract. The locked out workers picketed outside the clinic, singing songs and chanting, the latest development in an ongoing dispute over their benefits package ahead of crucial negotiations set to occur next week, on December 28.

At stake is whether the Rochester-based organization, which employees approximately 1,000 people in Albert Lea and is the city’s biggest employer, will guarantee benefits under the terms of a new contract, or instead proceed with its plan to offer unionized employees the same benefits packages all other employees receive. The key sticking point: The proposed contract would give Mayo the ability to make changes to benefits unilaterally, be they additions or subtractions to the current plans.

“It's not a financial burden, it's an administrative burden… Any changes to the benefits, additions or withdrawals, would have to be negotiated with the union, and we have 64,000 employees across the country and we have numerous labor contracts, so we are looking at internal equity, fairness among coworkers and colleagues, who work alongside each other, and we know our benefits package is very generous so we want all employees to have equal access to that to be fair and consistent,” she said.

Plumo said that Mayo has no plans to take away benefits from employees and, in fact, wants to make several improvements to their plans. But utility worker Justin Yost, 30, who participated in the strike and was in the picket line Wednesday, said he preferred having the benefits guaranteed in the contract.

“To me, why do you want to take that out? Is there a plan in place to get rid of it?” said Yost, who has worked at Mayo since he was 16. “If they do take my benefits away from me… I'd be looking for a different job. I think getting it in [the contract] and the sense of security of it, is important to me.”

The workers affected by the current dispute are either in the general contract, which expired in November of 2016, or the maintenance contract, which expired in October of 2015. The buildup to the strike has been contentious, with both sides filing complaints with the National Labor Review Board, and accusing the other of negotiating in bad faith.

The union says that the ability the Mayo is seeking to make changes to benefits without negotiation, which the union calls a “bargaining waiver” and the company calls a “me too” clause (unrelated to the hashtag by the same name), haven’t been a part of their contracts for the last 40 years. Meanwhile, Plumbo, the Mayo spokesperson, said that all the other unions the clinic works with, such as the Teamsters, Steelworkers, or AFSCME, have agreed to some version of the clause.

“Every single union contract has some version of the me-toos,” she wrote in an email.

SEIU Healthcare Minnesota maintained that they are willing to negotiate a benefits package that would match up with the benefits other employees receive, but that they wouldn’t allow Mayo to make changes after the contract has been agreed upon by both sides.

“This language would allow the hospital to make unilateral changes to our benefits and working conditions outside of our contract and without our consent—basically negating the point of having a contract in the first place,” said Sherri Wichman, a union member and sterile processing worker who has been with Mayo for 18 years.  “The hospital wants to take away our voice at the bargaining table, and we’re not going to stand for it.”

While other issues, like a subcontracting clause, are also in question, the benefits package and the “me too” clause will likely loom large over the negotiation table when the two sides meet three days after Christmas.