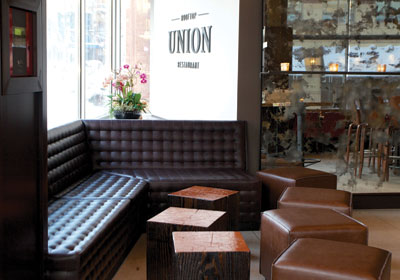 A stunning next act from the folks who brought you Crave.
April 01, 2013

As any parent knows, you should never compare one sibling to another. Yet it is almost impossible to discuss downtown Minneapolis’s newest dining addition, Union, without noting that its sister restaurant, Crave, is right across the street. They are nothing alike.

Crave is the chain of please-everybody restaurants that launched Kaskaid Hospitality. Union, on the other hand, is chef-driven dining—a phrase that has been rubbed raw of all meaning, which is here restored to its true definition—with a point of view that takes some risks.

Throughout the menu, Executive Chef Jim Christiansen plays with sweet and spicy in subtle—and not so subtle—ways. Start with the doughnut holes. Light as air and spiked with bacon and fried shallots, they’re meant to be dipped into creamy, slightly funky VÃ¤sterbotten cheese. On a beautifully composed plate of herb-roasted chicken there’s a swirl of caramel, tangy with buttermilk. It’s a bold move, and as long as you get all the flavors on the plate into one bite, it works perfectly.

At dessert, the tables are turned, with curry notes in the peanut brittle served alongside a chocolate panna cotta. (There was one too many elements on that plate, but they were all so delicious, it’s impossible to say which was superfluous.)

When the kitchen’s risks don’t quite pan out, you’re still rooting for it. Shishito peppers are seared and bathed in a light garlic-anchovy sauce. Two are plenty.

The main dining room downstairs feels like an updated steak house, but in the winter garden on the roof there’s a perpetual garden party underway, particularly magical under the stars (or the light show atop Target HQ). The crowd up here is younger by a couple of decades than are the diners below, and the menu—a pared-down version of the downstairs carte, with casual additions like a burger and a salmon entrÃ©e—is cheaper by a couple of dollars. For now, the upstairs reservation is the more difficult to get. Undoubtedly some Crave regulars are upgrading their usual night out.

What Works
Jim Christiansen's menu is on-trend without being trendy—and most of the risks he takes pay off.

What Doesn’t
Architecture and design firm Shea squeezed a lot of tables into the relatively small downstairs space. You could hold hands with the couple on the other side of the perforated wall, if you wanted to.