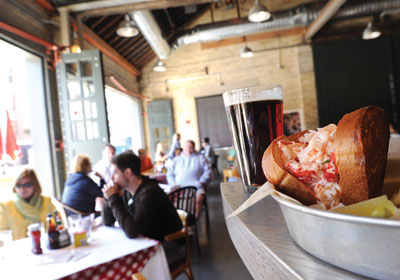 From food truck to multimillion-dollar edifice, Smack Shack 2.0 is here. Does it live up to the hype?
June 07, 2013

Smack Shack was the unfortunate victim of more food-writer hype than just about any Twin Cities restaurant in memory, and as its opening dragged, the pitch intensified. The bricks-and-mortar outgrowth of a lobster-driven food truck is the food-biz rebirth of Josh Thoma (La Belle Vie, Solera, Barrio), who was ousted by his old partners amid allegations of accounting impropriety.

Thoma has landed well, in a gorgeous and sprawling reclaimed North Loop industrial space, the centerpiece of which is a large lobster-boiling apparatus. The room is loud, informal, and boasts friendly, generally good service.

The food is a mixed bag, vastly overpraised by local critics, but not without its stellar points—particularly the signature roll of chilled lobster salad with a tarragon bite on soft griddled bread (not the split-top hot dog buns used in New England). Its sibling lobster roll, “Connecticut-style,” served warm with a hint of butter, lacked the requisite sweetness, and the soft hoagie roll was a poor match. In fact, despite what you’ve heard, none of the lobster at Smack Shack has the briny sweetness of lobster served the day it was caught. At best, it’s tasty lobster, at worst, vaguely seafoody.

The broader menu features the only local source of steamed clams (served in a broth with Old Bay butter), a selection of po’boys that won’t make a New Orleanian homesick, some tasty tacos, a large raw bar, and an assortment of fish boils.

Smack Shack is a fun addition to the local dining scene, but some of its coastal fare, such as the shrimp and lobster boils, seems best left to waterside settings, while others need rethinking. But I can’t think of a better place to land after a Twins game.

Standards such as chicken wings, fries, and crab cakes. Beer geeks may feel a bit let down by a middling craft selection.