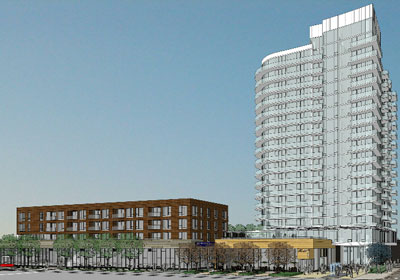 Details Emerge Ahead Of Vote On Superior Plating Site Plans

An 18-story redevelopment stands a good chance of getting support, as it aligns with the neighborhood’s goal of increased density.
January 30, 2015

Lennar Multifamily released its first renderings of an 18-story redevelopment of the Superior Plating site in northeast Minneapolis ahead of meetings with the neighborhood association.

The project, located at the corner of 1st Avenue NE and University Avenue NE in a former Superfund site, features both a high-rise and low-rise building that would feature 240 residential units, a nearly 5,000-square-foot restaurant, 17,000 square feet of street-facing retail and structured parking.

The Nicollet Island-East Bank Neighborhood Association (NIEBNA) is expected to consider a formal resolution in support to send to the planning commission after expressing concern over previous developers’ projects.

The projects stand a good chance of getting support. Victor Grambsch, president of NIEBNA, told TCB in December that the project was “95 percent of what we wanted.” Around the same time, Third Ward Councilman Jacob Frey said plans for the area would prove to be “the linchpin of the community.”

Neighborhood resolutions are typically non-binding, but hold sway before the city council and the planning commission.

The renderings released only show development for part of the site. A second phase located near the corner of 1st Avenue NE and 5th Street NE could be built at a later time.

The Superior Plating site was cleaned up and leveled many years as a crumbling, weed-infested Superfund site. The neighborhood has been vetting projects, but turned down several when they didn’t think they were tall enough for the area. An article in TCB’s February issue outlines the neighborhood’s aggressive goal to make the area into an affluent, bustling area akin to downtown with high-density buildings and no surface parking lots.