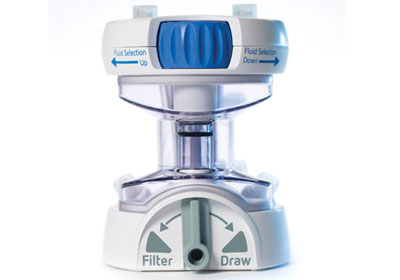 Engineering firm Primordial Soup draws from an extensive kitchen of collaborators to whip up medical devices.
May 11, 2012

The century-old Allen Building stands on the northeastern edge of St. Paul’s Lowertown, where the neighborhood’s old grid streets begin to bend and stretch out into Interstate 94 access ramps. In other words, here old meets new. And inside the Allen, on the first floor, a similar confluence is at work: There you’ll find a cozily cluttered cluster of workspaces where old-school engineers design and develop cutting-edge products.

At the heart of this mÃ©lange is an engineering firm called Primordial Soup, whose specialty is medical devices. The founders and principals—Tim Bachman, Matt Leyden, and Chris Trifilio, who call their firm Psoup for short—have put together a business recipe where device firms on the make can get their products developed without having to assemble their own engineering departments.

“We’re like the orchestrators of a project,” Bachman says. “We bring all of these needs in, and get all of this stuff done, and take the idea from the concept, prototype it up, figure it out, test it, build it up to something that’s manufacturable, source that manufacturer, get that manufacturer up and going, and hand off the reins to the company and let them do business.

“That’s why we’ve been so successful,” he adds. “We have this large, far-reaching network of all of the different bits and pieces that it takes to develop a product.”

Psoup began to come together in 2000. Bachman ran an engineering firm called Kyber, where he designed and manufactured prototypes for a number of Twin Cities medical device companies. As he built his business, he met Leyden and Trifilio, who both worked for Minneapolis industrial design firm Worrell before striking out on their own. In time, Bachman found himself with more work than he could handle.

But “knowing how the business goes up and down, I didn’t want to have to say, ‘Sorry, I can’t pay you anymore,’” Bachman recalls. “So it dawned on me: Why don’t I get some other likeminded guys who are doing [engineering projects], but still working out of their basement or attic? I said, ‘Hey, come down here. You’ll have bricks and mortar to hang your shingle on. And because we’d be just across the hall, it’s easier to share resources.’”

Leyden left Worrell in 2002, founded a small orthopedic development company, and in 2005 moved to the Allen. Four years later, Trifilio joined the group, and the Psoup partnership became official. They now work together in a space decorated with oriental rugs on the floor and racks of various device components. The Psoup space also includes a 2,500-square-foot machine shop with two CNC milling centers and a CNC lathe, along with other equipment.

Leyden distinguishes Psoup from what he calls the “booya”—the group of six other engineering firms that the agency has lured to the Allen. Like Psoup, which now has six employees, these other firms are quite small, with 13 people total. About 80 percent of the work flowing through the Psoup shop supports the projects generated by the booya; the rest is fee-for-service work done for outside device firms.

By and large, Psoup serves as a start-up or small company’s engineering department. (Its sole established-company client is Honeywell.) Psoup is currently involved in six projects whose fee is $50,000 or more; the company also does about 15 to 20 projects below that billable level per year. All of its work comes via word of mouth.

For Plymouth-based Circle Biologics, a client for 10 years (it originally worked with Bachman), Psoup has designed a product that takes whole blood from a patient, then processes it so that medical personnel can harvest the biological components, such as plasmas, for regenerating damaged tissue. The Psoup engineering team now is working on a device for Circle Biologics that takes bone marrow aspirate—the blood inside a bone—and harvests biological constituents for various regenerative uses (helping restore broken bones, for instance).

Psoup also developed the first product to be introduced by Excelsior-based QuickCheck Health, which is creating systems that allow people to take medical tests at home and get results online—and, if positive, complete an online clinic visit and get a prescription—without having to visit a doctor’s office. The first product allows patients to test for urinary tract infections.

QuickCheck started working with Psoup in December 2010 after what company founder, president, and CEO Tom Henke, a former senior vice president at Minnetonka-based health insurer Medica, terms “an extensive search.” Quick Check tapped Psoup, Henke says, because “they were the most creative and most innovative” agency that his fledgling company found. Henke particularly notes that Psoup has designed a “very simple” device: “They have a good sense of consumer experience and how to make a device easy for consumers to handle.”

In working with start-ups such as QuickCheck, Psoup not only can dip into the booya; it also can work with its comrades in the Medical Device Resource Group, a 14-member consortium of (mostly) Twin Cities–based companies that includes law firm Briggs and Morgan and clinical trial software firm Fortress Medical Systems, along with specialists in marketing, manufacturing, and medical packaging.

In addition to its prototyping work, Psoup would like to develop its own products in order “to build equity,” says Leyden, who notes that a fee-for-service firm’s worth “is pretty much zero.” It has one in-house product on the market. The Handy Bucket Builder is a simple, clever piece of plastic that can quickly convert standard five-gallon buckets along with two-by-fours and other basic pieces of lumber into worktables, simple scaffolding, and other construction-work support. It’s being marketed by Chanhassen-based Bercom, a maker of painting supplies that’s also a Psoup client. The Bucket Builder is available in many True Value, Do It Best, and Ace Hardware stores.

The Psoup partners budget about 10 percent of their time to in-house product development. “Eventually, we’d like that to become equal to or surpass the business of fee for service,” Leyden says. Psoup hopes to release two more products this year.

Product development isn’t Psoup’s only future plan. The three founders hope to lure more engineers into the collective. Like creative chefs, Primordial Soup’s principals know that you can always improve a recipe.