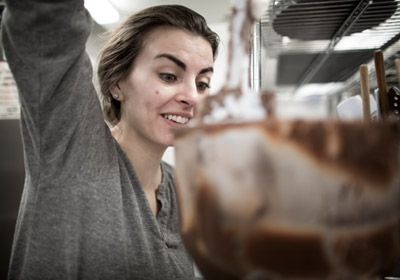 Several Twin Cities-area companies are featured in web documentaries and photo essays that coincide with the company’s 100th anniversary.
February 08, 2015

Shoreview-based Deluxe Corporation’s days as a small business are long behind it. Now a Fortune 500 company, Deluxe recently marked a century since its founding in St. Paul with a $300 loan. But small business is playing a big role in the company’s centennial celebrations.

Deluxe kicked off its “Small Business Revolution” this month, a yearlong campaign that will highlight 100 small businesses from around the country in online photo essays and mini-documentaries. Adding local flavor will be Red Stag, Bryant Lake Bowl, Tiny Diner, Laura Hlavac Design and Bogart’s Doughnut Co., among others.

In recent years, Deluxe diversified from primarily making checks to also offering small business solutions like email marketing and search engine optimization. “We take away the parts that feel like work,” is how chief brand and communications officer Amanda Brinkman puts it. That provided a natural pool of possible documentary subjects, but the company is also soliciting suggestions through social media, using the Twitter hashtag #100in365—for 100 stories in 365 days.

Three- to five-minute mini-docs and photo essays are already popping up at smallbusinessrevolution.org, and the series will culminate in September with a 22-minute full-length documentary. Deluxe commissioned an Austin, Texas-based documentary company and photojournalists whose backgrounds include National Geographic and Time Magazine.

Brinkman said Deluxe wanted to turn the spotlight on businesses that reflect the wide swath of locales in which its clients do business and an equally diverse array of people starting such businesses.

“Everyone got into business for different reasons. This project highlights their passion. … We really want to create a movement,” she said.