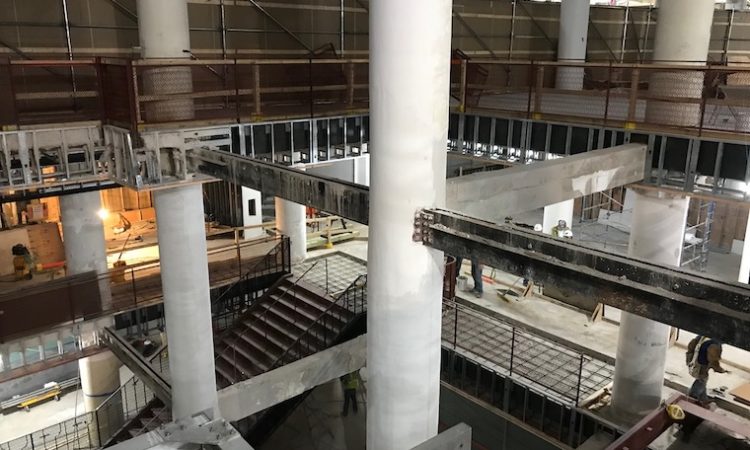 A view of the Dayton's Project from the skyway level, where a hole has been cut to reveal the main floor.

Developers of the Nicollet Mall landmark offer a glimpse at their progress and assurances that leases are in the works.
By Allison Kaplan
October 01, 2019

Twin Citians may be eager to peek inside the Dayton’s Project, but developers say an estimated 80 percent of the potential tenants seriously considering space in the landmark mixed-use re-development are companies that would be new to market.

“It’s the first time in my 15 years of commercial leasing that our main competition is not other buildings, but other markets,” says Erin Fitzgerald, principal for Transwestern in Minneapolis, which oversees leasing of office space in the 1.2 million square foot historic department store building. “The common thread is progressive, global organizations that are looking to attract and retain top talent.”

Could the long-awaited Dayton’s Project be a catalyst to draw new companies to town? Without offering specifics, Fitzgerald says firms considering the Dayton’s Project tend to be in growth mode and thinking about the quality of life for current and future employees as well as talent pool. Minneapolis tends to get compared to markets like Denver and Austin, Texas, she says.

For the upper floors of the 12-story building, Dayton’s Project is targeting larger users in the 90,000-square-feet range. It’s not about specific industries so much as company mindset, says Mercedes Barsh, vice president of the Telos Group, a partner in the project. “We cater to forward-thinking users that are very employee focused and want their employees to have amenities you won’t find anywhere else in the market.” 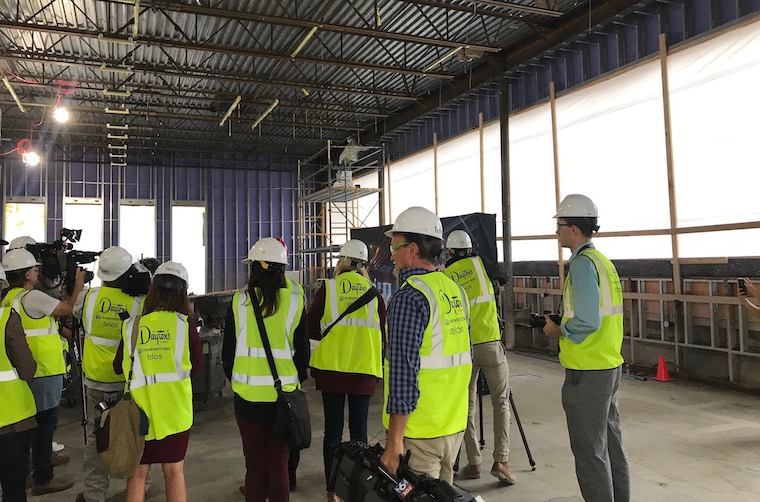 Members of the media visit the seventh floor of the Dayton’s Project, which will feature an indoor/outdoor lounge for office tenants.

On Tuesday, Barsh led a media hard hat tour through portions of the building, including what will be a 10,000-square-foot fitness center for office tenants only that will feature a boxing ring and top-of-the-line exercise equipment. On the seventh floor, a vaulted lounge area with an outdoor deck is beginning to take shape. It, too, is for the exclusive use of tenants.

“Minneapolis is a show-me type city. Now that we have aspects of the project to show, we expect things to move along very quickly,” Barsh says.

Leading the Dayton’s Project development is 601w Companies, which boasts a portfolio of 24 million square feet of commercial property across the country valued at more than $5 billion. But the firm is not well known in Minneapolis, which, Barsh acknowledges, has slowed the leasing process. “In Chicago, you can see the hundreds of millions of dollars 601w has invested and companies will sign on to one of their buildings on spec. Companies here are not making those jumps as quickly just because they don’t know us.”

Tuesday’s tour was the first time cameras have been allowed into the active construction site since a hole was carved out of the second floor to open the skyway level to the main floor of the building, an area designated for stores, restaurants, and the much-discussed food hall, which remains the only confirmed tenant of the entire project. The food hall is now scheduled to open spring of 2020. Whether there will be stores or office tenants in the building at that time remains uncertain. Barsh says the project will open “in stages.”

Mid-America Real Estate is leasing the retail portion of the Dayton’s Project—250,000 square feet from the skyway level down to the lower level. “The importance of this project is not lost on us,” Mid-America senior vice president of leasing Tricia Pitchford said in an interview with TCB last week. “We’re really trying to create a unique opportunity to eat, shop and be entertained. We want something unique, that embraces the character and history of the project.”

As with the office side, Mid-America isn’t naming names yet. But Pitchford says her team is looking beyond “obvious mall tenants.” She cited Canada Goose, the luxury outerwear brand that just opened its first Twin Cities location at Mall of America, as a retailer that could have been ideal for Dayton’s Project. “We want to find those users that are new to market, and more of a specialty type experience.”

Of course, selling downtown Minneapolis to retailers has only gotten more challenging in recent years. “We are presenting the facts of downtown demographics,” Pitchford says. “The residential explosion over the last five years is one of the highest in the country. If you only counted the people living and working downtown, we have more than any market needs (to support retail). We just need to change buying habits.”

Most of the retail spaces within the Dayton’s Project will be sized for smaller specialty stores. The largest spaces available are about 30,000 square feet split between two levels. The food hall, which TV personality Andrew Zimmern is helping to curate, will span 45,000 square feet and has space for about 45 vendors. The leasing team wants a mix of prepared and packaged foods; local and national. Pitchford says they’ve spoken to more than 100 potential vendors. “In the last two weeks, we’ve gotten into deeper discussions with users.”