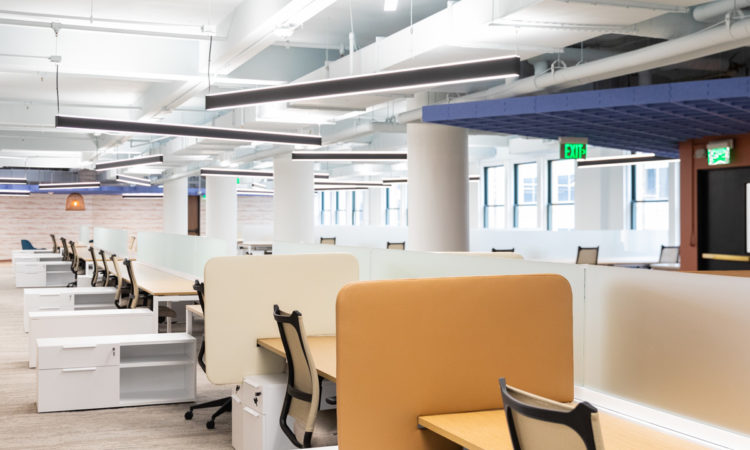 An example of a move-in ready office at the Dayton’s Project. The desks are designed for the Covid-era with custom-built desk dividers. Caitlin Abrams

601W, the project’s New York-based developer, continues its quest to stop a foreclosure sale of the property.
By Burl Gilyard
August 04, 2021

The Dayton’s Project redevelopment in Minneapolis, a project many have seen as important to the revitalization of downtown, is mired in litigation. New York-based developer 601W Companies sued New York-based Monarch Alternative Capital, which acquired the project’s mezzanine loan earlier this year, in June. The 601 Minnesota Mezz LLC entity is the plaintiff in the case.

Monarch poured gasoline on the fire when it began advertising plans to hold a foreclosure auction of 601W’s equity interests in the project on Aug. 23. 601W is in technical default of the mezzanine loan because it has not met leasing hurdles for the project. New owners could take over the project through the foreclosure sale. 601W has asked the powers that be to block the auction.

At a virtual hearing on Tuesday, Hennepin County Judge Susan Burke weighed arguments for 601W’s request for a temporary injunction to block the sale, currently scheduled for less than three weeks away. During the proceeding a new curveball surfaced.

During the hearing 601W’s lead attorney announced that the developer had a letter of intent for loans up to $250 million from two new lenders, Los Angeles-based Fortress Financial Services and Boston-based Winthrop Financial Associates.

That new financing would replace both the project’s primary construction loan and the mezzanine loan.

According to a statement from 601 provided to Twin Cities Business: “Counsel asked that the court forestall the auction and allow plaintiffs a mere three additional weeks in order for these complicated loans from major financial organizations to be appropriately processed.”

Massachusetts-based Carlisle Sandpiper, one of the project’s tax credit lenders, also filed a motion for a temporary restraining order to block the foreclosure sale.

According to a statement from 601: “601 Minnesota is ready to pay off the senior mezzanine loan in full and has requested a payoff balance from [the] defendants.”

The statements from 601W outline the potential disruption to the Dayton’s Project due to Monarch’s actions:

“Plans for the Dayton’s Project to host a ‘makers market’ of 50 temporary vendors for the holiday season starting on November 15th can potentially be jeopardized by defendants’ actions, as noted in the filing.”

“Monarch’s proposed foreclosure could jeopardize the iconic property in a number of ways,” said Mark Karasick, a principal with 601W. “Buyers at a foreclosure sale could demolish the carefully constructed historic renovation of the Project, remove the Dayton’s name, or lease the property to any manner of tenants who may negatively impact the local economy or be incompatible with the safe, family-oriented space.”