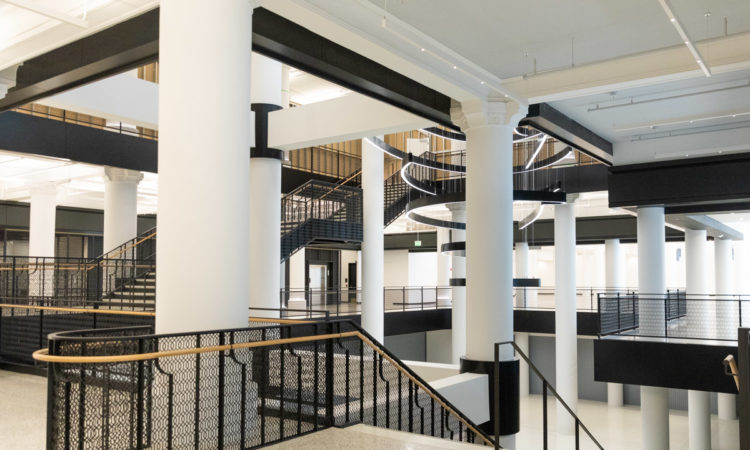 It’s rare to see a press conference held to announce the refinancing of commercial real estate property, which is normally just routine business. But the Dayton’s Project is no ordinary property. The Dayton’s building is big, iconic, and stands as one of the most ambitious redevelopment projects that downtown Minneapolis has ever seen.

Over the last two months it’s also been at the center of an ugly legal brawl between developer 601W Companies and Monarch Alternative Capital, which holds the mezzanine loan on the project. Both companies are based in New York. 601W sued Monarch in June. Monarch countered by advertising a foreclosure sale of 601W’s equity interests in the property because the developer is in technical default on the loan for not meeting leasing hurdles.

At high noon on Friday project backers gathered at the Dayton’s Project to announce a new financing partnership for the property valued at $208 million with developers kicking in another $18 million. Brian Whiting, president of Chicago-based Telos Group, a partner with 601W on the property, said leases will be signed in the next 90 days and plans are moving forward. “We are opening the building in the fall,” he confirmed.

At the hearing over the temporary injunction, 601W said that it had a letter of intent for loans up to $250 million from Los Angeles-based Fortress Financial Services and Boston-based Winthrop Financial Associates.

It’s been a long road to get to this point. 601W has now owned the property for about 4 ½ years.

601W acquired the former Macy’s department store in downtown in early 2017 for $59 million. 601W has spent $350 million to overhaul the property but it remains almost entirely vacant despite being largely completed just before the pandemic took hold in March 2020. The vision calls for roughly 750,000 square feet of office space and about 250,000 square feet of retail space anchored by a food hall.

“It would have been a monumental undertaking even in the best of times,” Whiting said.

Monarch acquired the mezzanine loan, which now stands at $78 million, earlier this year.