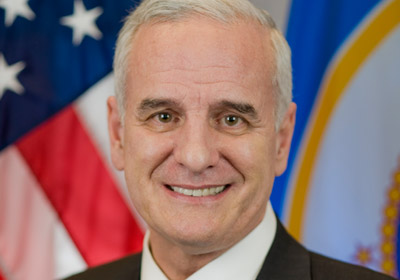 After dropping some controversial tax reform proposals, the governor said that raising taxes on the top 2 percent of the state’s earners would raise more than $1 billion in new revenue.
By TCB Staff
March 24, 2013

After receiving significant backlash for tax reform proposals in his initial budget plan, Governor Mark Dayton on Thursday released an updated proposal—one that removes a controversial tax on business services but retains a tax hike for the state’s wealthiest residents.

About 54,400 Minnesotans would be affected by the increase, which Dayton’s office anticipates will generate $1.1 billion in new revenue.

Citing research from the Minnesota Department of Revenue, Dayton’s office said that most of the state’s low- and middle-income earners pay about 20 percent more in proportion to their income in state and local taxes than the wealthiest Minnesotans, and the increase will help “address that disparity, honestly resolve our state’s budget deficit, and make long overdue investments in education and job creation.”

House Republican Minority Leader Kurt Daudt said the tax increase would be “bad for the Minnesota economy,” and Dayton should balance the budget by cutting spending rather than boosting taxes, according to a report by the Pioneer Press.

Dayton’s updated proposal eliminates the earlier sales and business services tax expansion, which had been sharply criticized by business leaders. Those taxes—which would have been applied to clothing items that cost more than $100 and a wide array of business services, including legal, accounting, advertising, and public relations—were expected to generated about $2 million in revenue.

Without that additional money, Dayton dropped the plan to reduce the state sales tax rate from 6.875 percent to 5.5 percent, as he had originally proposed, according to the Pioneer Press.

Dayton’s office said the new proposal still eliminates certain “corporate tax loopholes,” adding that the state currently spends about $323 million during each two-year budget period to provide breaks for 2 percent of Minnesota corporations, in effect rewarding them for having “certain overseas holdings.”

The new proposal would increase cigarette taxes, which has shaky support in the Democratically-controlled Legislature, and impose a so-called “snowbird” tax that would require people who live in the state for slightly less than six months each year to pay Minnesota taxes, according to a report by the Star Tribune. Dayton, however, has said he is unsure whether such a tax would gain legislative approval this year, the newspaper reported.

Less revenue is required to balance Minnesota’s budget than previously expected, which is likely one reason why Dayton is able to scale back his tax reform plans. A new budget forecast released last month shows that Minnesota will face a $627 million deficit in the 2014-2015 biennium—a significant drop from the $1.1 billion deficit that was projected in November.

Dayton’s proposing a $37.9 billion general fund budget for the next two years, about 7 percent higher than the current $35 billion budget.

The governor’s decision to eliminate the controversial business services tax from his plan did not come as a surprise; he said Friday that he would take it off the table, and the announcement was applauded by many business leaders and lawmakers.

Although many Republican leaders and local executives were relieved that the governor dropped his sales tax plans, they made clear that they oppose the income tax increase for wealthy Minnesotans, according to a report by the Star Tribune.

More information about Dayton’s updated proposal can be accessed here.