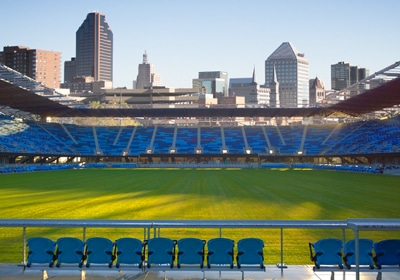 Coleman indicated St. Paul may present the best hope “…to make sure Minnesota has a Major League Soccer team.”
July 19, 2015

St. Paul Mayor Chris Coleman announced Thursday that he is all-in on recruiting Major League Soccer to build a stadium in the city for a new expansion franchise.

Coleman, who has been a bit coy about the city’s interest, said that the league’s assertion that a July 1 deadline for a Minneapolis stadium deal was real and had passed provides “a small window of opportunity to make sure Minnesota has a Major League Soccer team.”

The location he is pushing is the former bus barn site on Snelling Avenue between I-94 and University — walking distance from the Green Line’s Snelling Ave. station. It is currently owned by the Met Council, which has been preparing to offer it for sale. Because it is currently untaxed, keeping it so under a stadium plan would not cost the city and other governments existing revenue.

“The enthusiasm around the USA winning the Women’s World Cup demonstrates that there is growing support for soccer,” Coleman said in a morning statement. “The St. Paul site is the only viable path at this point. Not only would a stadium at this location take advantage of all modes of transportation, but it would substantially accelerate redevelopment in the area.”

“Given the MLS deadline, I think we need to move expeditiously to get a project built on the Snelling and University site,” Coleman said in the statement. “Minnesota deserves a Major League Soccer franchise and I’m prepared to work to make that happen for Minnesota and St. Paul.”

The site is not exactly downtown, but it is between the two metro area cores and is served by light rail as well as exits from I-94.

St. Paul talks heat up
St. Paul has been playing a peripheral role in the soccer debate since mid-May when Minnesota United owner Bill McGuire met with Coleman and his deputy mayor to talk about putting the stadium in the capital city. At the time McGuire was becoming frustrated with both state and Minneapolis politicians but had been having some success in private meetings with some Minneapolis council members.

The only public admission that the ownership group was considering other host cities came in a lightly attended community meeting sponsored by Council Member Alondra Cano May 19. During a forum on soccer and the stadium, United President Nick Rogers said: “Minneapolis might say to us, ‘We don’t want you here.’ And then we’ll have to assess our options and figure out where is there a community that wants us. That’s important. It’s important that the community wants us to be there.”

Rogers wouldn’t say anything more and Coleman, through a spokeswoman, said he wasn’t interested in interfering with ongoing talks between the team and Minneapolis. It was two weeks later, however, that the mayor’s office acknowledged that the initial meeting with the team had already happened.

St. Paul talk heated up last week when MLS deputy commissioner Mark Abbott said the league had set a deadline of July 1 to have a stadium deal and since that had passed he was interested in meeting with St. Paul.

The issue isn’t really whether St. Paul had sites that would meet MLS desires — downtown or near so — but whether the political leaders would accept the demand for two tax breaks. The first would be the forgiveness of sales taxes on stadium construction. The second was making the stadium itself exempt from ongoing property taxes. All other arenas and stadiums benefited from both exemptions but all are — legally, at least — publicly owned. The soccer stadium was to be privately owned although McGuire has said he is open to having it put under a public authority as is the case with the new Vikings Stadium and Target Field.

Whither Minneapolis?
The initial proposal by the McGuire group was for a new stadium in an underdeveloped area next to the Minneapolis Farmers Market near Target Field. Minneapolis has formed a work group of senior staff, Mayor Betsy Hodges and some council members, to look in to the request and study its implications on tax revenue, development and other facilities such as city owned Target Center.

“I’m not at all surprised that Mayor Coleman excited about the potential of Major League Soccer,” said Council Member Jacob Frey who is leading the effort in Minneapolis. “Thinking regionally, an MLS team could do tremendous things for either city. But obviously I’m biased. My first choice is Minneapolis.”

Frey doubted the cities would get into a bidding war for the stadium and said he wasn’t yet sure if the St. Paul effort would change Minneapolis’ timetable which calls for a final work group report to be finished by December.