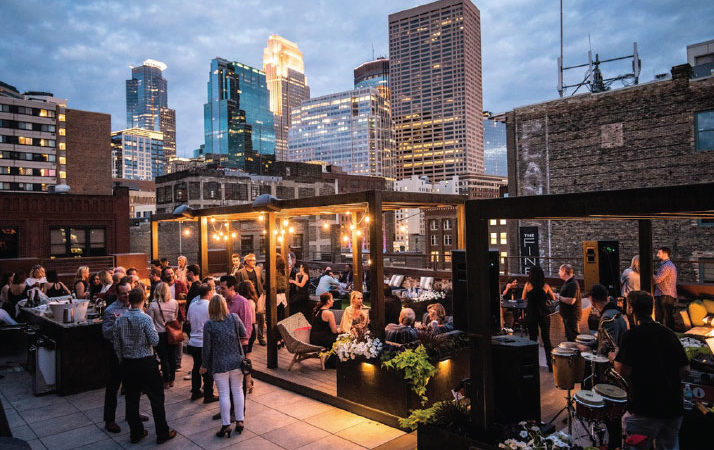 The Brick x Mortar rooftop is one of the distinctive features of this social club, which is considered a shared workspace hybrid. Located in Minneapolis, it serves as a modern urban club.

The latest business phenomenon to go under the millennial knife? The club.
By Ellen Schneider
May 20, 2019

The businessperson’s social club is not dead. The modern iteration is one that tries to promote creativity and networking, all rolled into one classy happy hour.

“Minneapolis was ready for a modern version of the [urban] club, one that’s casual and unpretentious,” says Zach Sussman, co-founder of Brick x Mortar. Sussman and partners opened their social club/shared workspace hybrid in 2017.

Brick x Mortar isn’t where you go to plug in your laptop and hammer away before a deadline—it’s designed for a curated networking experience. “Instead of the shotgun approach of going to a bar and hoping you meet like-minded people,” Sussman says, “this is a guaranteed experience.”

One: There was already a strong focus on the social aspect of the workspace. “Desks and Wi-Fi were never the exciting part,” Ball says. “It was meeting other people.” Two: Leadership at Fueled started considering its biggest expense—rent. “We were only monetizing the space from 8 to 5,” Ball says. “What if we use [it] at night?”

The transition begins with bringing a bar to the company’s downtown Minneapolis space— two nights a week at first with a plan to add more nights going forward.

Membership at Brick x Mortar is by invitation only, but you can reach out directly and make a case for why you’d be a good fit. At Fueled, social club membership is $75 a month and includes two daytime passes. —Ellen Schneider