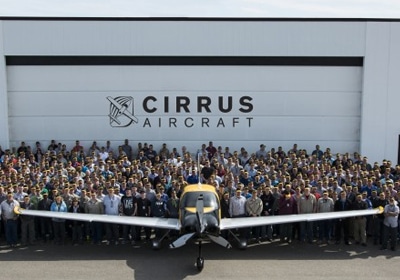 With the Duluth company’s 6,000th aircraft sold, Cirrus continues its dozen-year run as the top seller of four/five-place aircrafts.
July 02, 2015

The first production aircraft from Cirrus entered customer hands only 16 years ago. The company’s SR-series aircraft has maintained a 12-year run as the best-selling four/five-place aircraft in the world.

“We started Cirrus Aircraft with the entrepreneurial dream of changing the world and making people’s lives better through aviation,” Cirrus co-founder and CEO Dale Klapmeier said in a statement. “We are humbled today to see 6,000 of our airplanes operating in more than 60 countries around the world.”

A key feature to Cirrus’ success has been its unique implementation of a built-in parachute to the aircraft, known as the Cirrus Airframe Parachute System (CAPS), which the company claims is “the most significant safety innovation in over a half-century of general aviation. To date, CAPS has saved 105 Cirrus pilots who pulled the chute in time.

“Our passion and dedication at Cirrus are making aviation safer and more enjoyable for thousands of people,” Klapmeier added. “I’m truly excited to see our team continue to change the world as we prepare for the introduction of the Vision SF50 Personal Jet and the opening of our Vision Center in Knoxville, Tennessee.”

The Vision SF50, which should be FAA-certified by the end of 2015, will cost $2 million and already holds 550 reservations. Production of the Vision SF50 will take place in Duluth as Cirrus plans to lease a $10 million facility from the city to paint and perform final tasks on the jets before they are delivered.

The Knoxville location—arriving next year—will house Cirrus’ customer service center as a place for buyers to test Cirrus planes without the unpredictability of Minnesota weather.

Dale Klapmeier was chosen as one of Twin Cities Business’ 2015 Hall of Fame winners. A full spread on Klapmeier will be featured in the July issue. Meanwhile, the Hall of Fame event is scheduled to take place on July 21 at 5:30 p.m. at the Hilton Minneapolis.