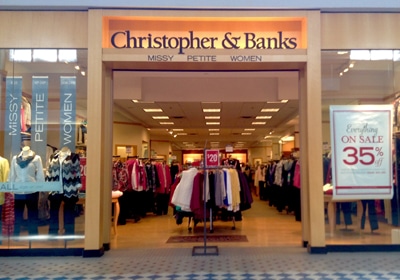 Second quarter results revealed a nearly 12 percent dip in net sales for the women’s retailer as its 532 stores battle poor mall traffic and other challenges.
August 24, 2015

The company had sales of $94 million, falling short of its sales prediction range of $100 million to $103 million. That’s an 11.8 percent drop from the $106.6 million posted during last year’s second quarter.

Christopher & Banks Corp. operates 532 total stores in 43 states today, down from the 545 it ran a year prior. LuAnn Via, the clothing retailer’s president and CEO, chalks the losses up to lagging mall traffic and “unfavorable macro challenges.” A reduction in clearance merchandise and a “more aggressive promotional environment” also played a part in the sales shortfall, Via said.

The company’s stock has plummeted since the Q2 results were made public, falling by more than 50 percent from its $3.25 closing yesterday.

Christopher & Banks’ thirteen-week period ending May 2 of this year revealed a similar plunge of 11.2 percent in the retailer’s net sales figures. Christopher & Banks made only $91.6 million compared to $103.4 million reported during the same timeframe in 2014.

CEO Via said the company will take a number of steps to improve results, including a comprehensive review of the business and bringing in an outside consultant for guidance.

Via added that eCommerce was the only area of improvement for Christopher & Banks with double-digit growth figures, however the exact numbers were not released. TCB requested further clarification on this matter and others, but Christopher & Banks has yet to respond.