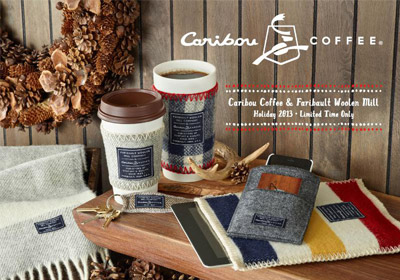 Caribou Coffee is joining forces with Faribault Woolen Mill Company, to sell a line of joint merchandise; it is also opening two new co-branded locations in the Twin Cities with Bruegger’s Bagels.
November 17, 2013

Brooklyn Center-based Caribou said it wanted to partner with a company with similarly strong regional ties. Caribou opened its first location in Edina in 1992. Faribault Woolen Mill has been based in Faribault since 1865 and bills itself as the oldest manufacturing entity in the state—although the mill was closed for a couple years starting in 2009.

The co-branded merchandise from the coffee shop and textile producer will include coffee sleeves, phone sleeves, tablet sleeves, key chains, ceramic tumblers with a sleeve, and “lodge-style throws.” Caribou said it is selling limited quantities at every coffee shop location.

“Caribou is truly honored to partner with another Minnesota company that is equally as defined by its commitment to artisanal, premium products, and the communities it serves as we are,” Caribou CEO and President Mike Tattersfield said in a statement.

Caribou is also cross-branding with Burlington, Vermont-based Bruegger’s Bagels to open shops that serve Bruegger’s bagels alongside Caribou coffee. According to the companies, two of their co-branded locations will open in the Twin Cities on November 15—one in Roseville and the other in St. Paul.

While still based in Minnesota, Caribou went private in December when it was bought out by a German holding company—Joh. A. Benckiser Group (JAB)—for $340 million. Its German owner had also already bought a majority stake in California-based Peet’s Coffee & Tea, Inc., for $1 billion.

JAB announced in April that it would shutter 80 Caribou locations and convert another 88 to the Peet’s Coffee & Tea brand. At the time, Caribou said the move would allow it to focus on Minnesota, its largest market.