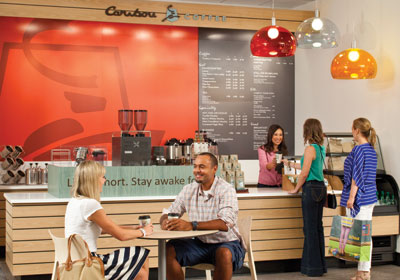 The companies are discussing a rollout of Caribou locations in existing stores.
December 01, 2012

When jcpenney CEO Ron Johnson gave analysts a September sneak peek at the retailer’s next-gen stores, few expected to spot a Caribou Coffee. But that’s exactly what they found tucked inside a prototype constructed on the third floor of a Dallas store.

The revamp, slated to occur over the next few years, is meant to make the department store more like a shopping mall, carving most locations into upwards of 100 brand and lifestyle “Shops,” with brands ranging from Disney to Dockers. Beyond the Shops concept, the company will introduce “The Street,” a half-mile drag along which customers can lounge on couches, use complimentary iPads, or enjoy a cup of joe from vendors—“like Caribou,” Johnson told analysts.

Details are sparse, given the companies are in talks, but Johnson’s comments (and Caribou’s inclusion in the prototype) strongly imply a partnership is brewing.

Caribou is “the perfect example of an entrepreneurial company that has a great regional presence, can grow its footprint more rapidly, and expose a whole new group of customers to its terrific coffee, with jcpenney,” says Laurie Beja Miller, a jcpenney executive vice president helping lead the store overhaul.

The partnership “could be a big opportunity long-term” for Caribou, especially in terms of geographic diversification, says Matt Bendixen, a senior research analyst with Minneapolis-based Craig-Hallum Capital Group, LLC. He says Caribou would best benefit if it could strategically select which jcpenney locations it inhabits.

The company will enter eight of Supervalu, Inc.’s Chicago-area Jewel-Osco stores by the end of 2013 and is already in many Lunds, Inc., locations. But a deal with jcpenney would represent the chain’s first foray into clothing retail stores—and it would more closely resemble rival Starbucks’ presence in Target.

Caribou’s 410 domestic stores are limited to 22 states. jcpenney, meanwhile, operates 1,100 stores in 49 states and Puerto Rico. Expansion to even a fraction of the nearly 700 larger stores slated for an overhaul would represent substantial growth for the coffee chain.