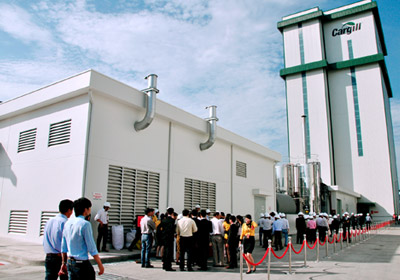 Cargill significantly expanded capacity at a Vietnam plant, a move that will result in the addition of roughly 50 jobs.
May 22, 2014

Food and agricultural products giant Cargill, Inc., recently completed a $20 million expansion at a facility in Vietnam in order to meet demand in that country for animal feed.

Wayzata-based Cargill, Minnesota’s largest private company, operates in 67 countries and first entered Vietnam in 1995. It now employs more than 1,100 workers in the country, where its operations include animal nutrition, cocoa production, food and beverage ingredients, grain and oilseed trading and marketing, and metals trading.

Cargill said it has invested more than $110 million in Vietnam’s “livestock and aquaculture industry” during the last decade, and its latest expansion was made to one of its eight compound feed mills in Vietnam. The expansion increased the plants capacity by four times, and Cargill said the move will create about 50 new sales and support jobs.

“Our investments demonstrate our confidence and commitment to the growth and future of Vietnam's feed industry,” Joe Stone, president of the feed and nutrition business in Cargill's “animal nutrition” division, said in a statement. Stone said Cargill aims to provide “comprehensive animal nutrition solutions” to customers in Vietnam.

For its most recent quarter, which ended February 28, Cargill said its earnings fell 28 percent to $319 million. President and CEO David MacLennan said, however, that Cargill’s animal protein business was “much improved from last year,” and he said that the 2012 acquisition of Provimi has put the company's global animal nutrition operations “on a record pace for the year.”

Cargill routinely makes multimillion-dollar investments in and expansions to its global operations. Last month, the company said it was gearing up to expand its “farm service centre” in Morris, Manitoba, increasing rail capacity and grain storage. Cargill currently employs about 143,000 people worldwide.

In other Cargill news, the Star Tribune recently reported that the company is battling drought conditions in the southern United States. It's reportedly set to close a Texas feedlot, and last year it shuttered a large beef-packing plant in that state.