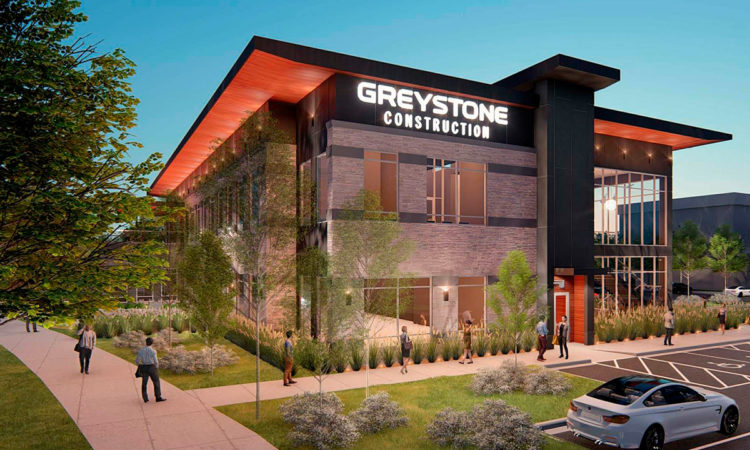 Greystone Construction will ultimately move to the office building in the development. Courtesy of Canterbury Park Corp.

Canterbury Park is contributing 13 acres of land to the deal valued at approximately $261,000 per acre, or roughly $3.4 million for the parcel. Canterbury Park will own 62 percent of the joint venture; Greystone Construction will own 38 percent.

Canterbury Park’s primary businesses is offering wagering on horse races and card games. The 140 acres of land comprising Canterbury Commons is not needed for its racetrack operations.

The Canterbury/Greystone plan envisions a mix of hospitality, housing, and retail, including seven different buildings. The proposed project elements are:

But at this stage of the project, details such as unit counts and square footage are subject to change depending on what deals ultimately come together for those spaces.

Greystone Construction will ultimately move to the office building, which will become its new headquarters. Greystone will occupy the second floor of the office building. Plans call for Greystone to break ground on the project this fall. Beyond that, the senior housing deal is likely to fall into place first.

Development at the site began in 2018 with a joint venture between Canterbury Park and Bloomington-based Doran Cos. The two-phase Triple Crown Residences will ultimately offer more than 600 apartments.

In April, Canterbury Park struck two separate deals which will bring another 160 housing units to the site.

Canterbury Park still has 90 to 100 acres of land available for development at the Canterbury Commons site.

Canterbury Park Holding Corp. is a publicly traded company. For 2019, the company reported a net profit of $2.7 million on revenue of $59.2 million.