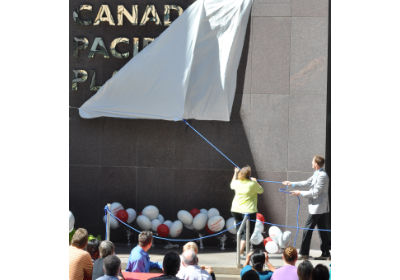 One Financial Plaza is now called Canadian Pacific Plaza, a change that is part of the building’s lease agreement with its new tenant.
August 31, 2012

One Financial Plaza, a 26-story office tower in downtown Minneapolis, has been renamed Canadian Pacific Plaza.

The change was made after Calgary-based railroad company Canadian Pacific relocated its U.S. headquarters to the building.

A sign displaying the new name was unveiled in a ceremony held Monday.

Canadian Pacific spokesman Ed Greenberg told Twin Cities Business that the name change was part of the company’s lease agreement with the building’s owner, Minneapolis-based Hempel. Greenberg wouldn’t provide details about the agreement or reveal when the lease will expire, but he said that it’s a “long-term” contract.

Canadian Pacific started moving its 400 local employees to its new location at 120 South Sixth Street back in April, and the move was completed earlier this month. The company’s U.S. headquarters was previously located at the Soo Line Building, located just a block away at 501 Marquette Avenue South. The company had occupied the Soo Line Building since 1914, Greenberg said.

The company now occupies five floors at One Financial Plaza, or about 70,000 square feet.

Greenberg said that Canadian Pacific made the decision to move to the current location as its lease with Soo Line Building was set to expire.

“Soo Line will always hold a special place in our history, but the move to the newly retrofitted offices, with modern amenities, are a good match for what we require at our U.S. headquarters,” Greenberg said. “The close proximity to our old location provided a fairly smooth transition for our employees.”

Hempel, which bought One Financial Plaza in 2011, said in a press release that it recently invested a “significant amount of capital” to upgrade the building’s lighting, elevators, elevator lobbies, restrooms, and corridors. It also constructed a new fitness center, among other infrastructure improvements.

Hempel previously also owned the Soo Line Building before selling it to Michigan-based developer Village Green, which reportedly has plans to renovate the building into 250 upscale apartments.