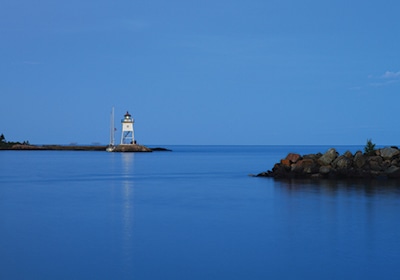 Minnesota’s northeastern-most county is having a strong run. Can this cool area stay hot?
January 02, 2016

Kratt, whose visitors bureau draws most of its budget from those receipts, was hoping for a 3 percent year-over-year receipt increase from May through September 2015. Instead, the revenue boost was nearly 9 percent, with Grand Marais particularly strong. The months of June through October are the county’s biggest months for tourists.

About 80 percent of Cook County’s economy is based on tourism—the highest percentage of any county in Minnesota. Cook County also is distinctive in other ways. Its population ranks 82nd of Minnesota’s 87 counties, with a 2010 count of 5,176. At 1,452 square miles, it’s more than 2½ times larger than Hennepin County and nearly 10 times the size of Ramsey County. There’s only one main road in the sparsely populated county.

But Cook County also is one of two key entry points to the Boundary Waters Canoe Area. Its one major road, Highway 61, passes through what many consider some of the most gorgeous scenery in the United States. One of the county’s biggest attractions, Lutsen Mountains, is a top destination for downhill skiing in the Midwest. And starting in the 1990s, the county became a magnet for well-to-do retirees and second-home property owners.

The county’s leaders span the age spectrum, and they appear close-knit and energetic. They’ve chosen to live in a place with deep Nordic winters. They share a vision of economic progress that has helped Cook County rebound from the recession and a sluggish decade that preceded it. The spike in lodging tax numbers is evidence that the vision is becoming reality. At the same time, they acknowledge that big challenges remain.

Over 80 percent of Cook County’s economic activity comes from tourism.

Of the county’s $150 million recorded sales in 2014, $33 million was attributed exclusively to lodging.

But 2015 was a good year for Cook County leaders to build upon. An improved economy contributed to the increase in visitors, as did favorable weather during the summer and fall. Grand Marais also was selected in March as the “Coolest Small Town in America” by Budget Travel magazine.

Cook County had positioned itself to take advantage of those developments. In 2010, the county’s three visitors bureaus joined forces into one central organization. Kratt, a Grand Marais native who’d worked for the Duluth Chamber of Commerce and in various promotional capacities, was lured back to lead the organization in 2013. By bringing together funding from hotels and resorts on the Gunflint Trail, Grand Marais and the Lutsen-Tofte area, Visit Cook County now has a $1.8 million budget to promote the county. The Grand Portage Band of Lake Superior Chippewa’s resort and casino also contributes funding, though it’s not subject to the lodging tax.

Tourism is the top economic driver in the area, particularly now that the fishing and logging industries are shadows of their pasts. Still, county leaders say there’s more to entice people to become year-round residents in the upper Arrowhead.

The arts offer the biggest opportunity for economic diversification, county leaders say. In fact, the arts already have a presence in the far northeast county. Cook County long has had a reputation as a magnet for painters, potters and other artisans, both as visitors and as residents. That pattern took root in the late 1940s with the founding of the Grand Marais Art Colony, which now sponsors art shows and events and offers studio space and classes in glass, clay and other mediums.

“People are becoming more accepting of the arts as an economic driver,” says Amy Demmer, Grand Marais Art Colony’s executive director. Demmer points to a 2013 Americans for the Arts study showing that the arts contribute $4.6 million to Cook County’s economy. She also notes that 75 percent of the Art Colony’s students come from outside Cook County.

The Art Colony isn’t the only creative center in Cook County. Grand Marais’s austerely beautiful waterfront is also home to a unique educational entity called the North House Folk School. Founded in 1997, North House offers an astonishing variety of classes in all sorts of folk arts, including blacksmithing, baking, timber framing, knife forging and shoemaking. A record number of students—about 2,200—came to North House in 2015, says Jessa Frost, the school’s program director. Most of them came from outside the North Shore, attracted by the school’s distinctive offerings. Though most students view their chosen craft as a hobby, Frost says some have taken what they’ve learned at North House to start businesses.

North House now operates from a harborside campus of five small buildings clustered around an open space that has become a gathering place for Grand Marais events. One of them is Unplugged, a fall concert series featuring acoustic musicians. Supporting the local arts scene is WTIP, an independent public radio station that also broadcasts music by local musicians and sponsors the annual Radio Waves Music Festival.

Many county artists, musicians and artisans are entrepreneurs, financially sustaining themselves as performers, gallery owners and sellers. That’s in addition to resort owners, outfitters, restaurateurs and construction companies that have established themselves in the county. Area leaders would like to attract and promote more new businesses, particularly if that means more residents like Cara Sporn.

Sporn is a Twin Cities native who fell in love with Cook County in her youth. She and her husband, Paul, another non-native, moved to Grand Marais to take over a local restaurant called My Sister’s Place. In February 2015, the Sporns and two other couples opened the Voyageur brewery and taproom on Highway 61. The venture’s going well so far: Voyageur Brewing already is bottling and selling products throughout northern Minnesota, and it could soon find its way down to markets in the Twin Cities.

This past summer, the county was connected to the True North high-speed broadband network established by Arrowhead Electric, a regional power cooperative. This could provide an expanded opportunity for the county’s lodges, craftspeople, construction firms, real estate agents and other businesses to connect to a wider market.

In short, there’s no other place in Minnesota quite like Cook County.