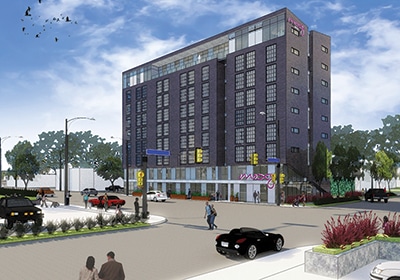 A Hotel Rises In Uptown

Graves looks set to be the one who builds Uptown’s first hotel.
January 09, 2016

Minneapolis has more than 7,000 hotel rooms. Yet despite a decade of announced projects, exactly zero are located in Uptown or near the lakes. After years of trying to find a site, however, Minneapolis-based Graves Hospitality Corp. has plans for a 145-room hotel at the southeast corner of Lake Street and Emerson Avenue South.

The site, on the border of Lyn-Lake and Uptown, is currently home to a shuttered Indian restaurant and a surface parking lot. Graves’ plan calls for a nine-story hotel on the parcels, which are across the street from an Arby’s. Uptown has been a magnet for new apartment construction in recent years, but it’s not clear how a hotel will fare.

“It’s an untested market,” concedes Benjamin Graves, the company’s president and CEO. But he notes that the company has experience bringing hotel projects to new areas: “We’ve done this before.”

Graves Hospitality opened the 64-room Hotel Williamsburg in Brooklyn in 2011, a boutique hotel that was the first of its kind in the emerging neighborhood. Graves says that the project is a “very successful hotel” that Graves has since sold.

Graves has a purchase agreement for the site and doesn’t foresee any trouble in arranging financing: “It’s a good project,” he says.

The Uptown hotel will fly the Moxy flag, a new mid-market Marriott brand (with only one hotel to date) rather loudly marketed to the “millennial traveler.” Graves also plans a Moxy at the intersection of Chicago and Washington Avenues in downtown Minneapolis.

“They’re designed for definitely a business traveler,” says Graves of Moxy, “but somebody who wants to stay in an area and experience the local scene.”

Hotel broker Ted Leines says that Uptown, which has plenty of rental units, could be a good fit. But Leines wonders if the demand will be deep enough. ”There’s a fair amount of corporate business to the west that would create demand,” says Leines, CEO of Eden Prairie-based Leines Hotel Advisors. “But 145 rooms are a lot.”

Graves hopes to start construction this spring, with an opening in the summer or fall of 2017 for the Uptown project. “It’s very akin to the Brooklyn project that we did,” says Graves, in “a vibrant neighborhood with a lot of activity.”