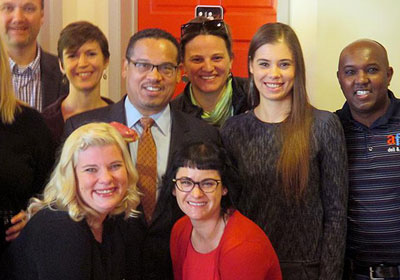 Small business owners affiliated with the group Main Street Alliance are asking the public to patronize places run by those who support the proposed policy.
December 05, 2015

Just in time for Black Friday and Small Business Saturday comes a merging of commerce and politics over the issue of paid sick leave in Minneapolis.

The progressive small business group Main Street Alliance, which opened a Minnesota affiliate earlier this fall, has added Minnesota to its national campaign to urge people to “Shop Your Values.” At a rollout earlier this week on Nicollet Avenue attended by U.S. Rep. Keith Ellison, a batch of small business owners endorsed mandatory sick leave before asking that people shop at stores, eat at restaurants and use services run by people who agree with the group's political agenda.

While paid sick leave is the issue in Minneapolis, affiliates in other states have been active in supporting health insurance and minimum wage. The Minnesota affiliate had been rare among business groups in that it was willing to work with the city on a so-called fair scheduling ordinance, which has been shelved after business complaints.

(On the other side of the political spectrum is Faith Driven Consumer, which has an app to help Christian conservative voters shop and dine in line with their faith. Starbucks is not on the list, for example, but Dunkin’ Donuts is).

What remains of the ambitious Working Families Agenda unveiled in August is an examination of mandatory sick leave for private employers in Minneapolis. Last week, the City Council approved a 15-member work group made up of employees, employers and business organizations. At least three of the business owners at the Shop Your Values rollout are members or alternates of the work group, which has until the end of February to look at mandatory sick leave and make recommendations to the council.

The specifics of the issue were less in evidence at the Monday rollout than a general agreement that a minimum requirement for letting workers accumulate leave was needed. The reasons were many: to help workers when they are sick or have sick dependents; to protect the public from being served by servers or clerks who are contagious; and to protect employers who might want to offer the benefit but who would rather not be at a disadvantage to competitors who don’t.

“As business leaders we are also leaders in our community, and we have a responsibility to create the community, the city and the state we want to be,” said Molly Glasgow, the owner of Point Accupressure and a member of the city’s work group.

Another work group member, Common Roots Cafe owner Danny Schwartzman, said business owners don’t have to be members of the Mainstreet Alliance to be part of the Shop Your Values campaign. They do, however, have to sign on to a pledge to support a minimum level of paid sick leave.

The pledge acknowledges complaints that even some business owners sympathetic to the Working Families Agenda have about the way the was rolled out in August. “There were some challenges with the way the city rolled out the Working Families Agenda,” read the pledge form. “Clearly more outreach should have been done to include small businesses in the conversation earlier on. That said, we want to help address the problem that many people in our city need to stay home when they or their children are sick, but can’t afford not to work.”

Corinne Horowitz, the state director of the Mainstream Alliance, said the group will maintain a list of businesses that sign the pledge and urge residents to “put their money where their mouth is and shop at businesses that care about their city and their employees.”

Dan Ogiba, who owns the five-store Toppers Pizza, said he supports paid leave for his workers because he wants them to stay home when they are sick so they can come back to work “happy and healthy.” Ogiba said only one of his restaurants would be governed by the Minneapolis ordinance if it’s passed next year. But he said he would offer the same benefits to his employees outside of Minneapolis.

Ellison said the debate over benefits shouldn’t be an either/or discussion between employees and business owners — but one of “both/and.”

“These folks here know employees are not a cost to be minimized,” he said. “They are an asset to help build and strengthen the business.” With him were two Minneapolis council members, Elizabeth Glidden and Cam Gordon, who supported all of the planks of the Working Family Agenda.

Objections from both large and small businesses to the first draft of the fair scheduling plan forced Mayor Betsy Hodges to ask that the measure not be considered now. Then, she and council leaders decided to delay the sick leave debate until the work group can report back.

This is the second public event held by the Main Street Alliance, and it went far more smoothly than the first. Last month, at a press event where the alliance’s offered a qualified endorsement to the fair scheduling plan, other business owners who were opposed showed up and turned it into a debate.

Paid sick leave, while still controversial, is less contentious than fair scheduling, which would have required businesses to give at least two weeks' notice of work schedules and sometimes pay extra to employees for changes. Only one city in the U.S. has such an ordinance, San Francisco, but even that law is far less sweeping than the draft ordinances were in Minnesota.

In contrast, four states, 19 cities and one county in the U.S. have mandatory paid sick leave laws or ordinances currently on the books.