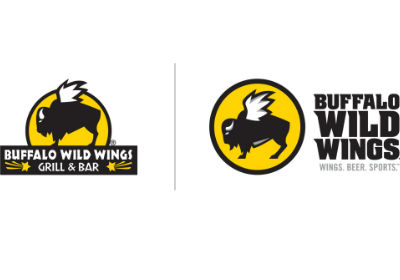 The restaurant chain revealed a new logo Wednesday and said its future restaurants will “create an atmosphere that feels more like being in a stadium.”
July 22, 2012

The company also revealed plans to alter the look and feel of its future restaurants.

Some of the changes to the logo include a buffalo with bigger wings, narrowed eyes, and upward-turned horns. Gone are the words “Grill and Bar” that appeared below the buffalo in the original logo. Instead, the words “Wings,” “Beer,” and “Sports” appear beneath the company’s name.

“As we prepare for further international expansion, this change allows the Buffalo Wild Wings logo to more easily represent our brand abroad and be slightly modified for local cultures,” Kathy Benning, executive vice president of global marketing and brand development, said in a statement. “The changes give us more flexibility in the use of the logo, and it appeals to our wide and growing audience—including women—while maintaining a sporty masculinity.”

In addition to updating its logo, Buffalo Wild Wings said that its new restaurants will feature a more sports-centric design, which will be unveiled later this year at locations in Cincinnati and San Diego. Most restaurants opening in 2013 and those that are remodeled will also feature the new design, the company said.

“We looked at every aspect of the guest experience, and we’ve refined the look and feel of our restaurant to create an atmosphere that feels more like being in a stadium,” Benning said.

Buffalo Wild Wings CEO Sally Smith is being inducted Thursday into Twin Cities Business’ Minnesota Business Hall of Fame. To read more about how Smith has transformed the company during her 16-year tenure, click here.

Buffalo Wild Wings has more than 835 locations in the United States and Canada and is one of Minnesota’s 40-largest public companies based on revenue, which totaled $784.4 million in 2011.